A security alarm went off over the weekend at the Georgia warehouse that is housing 147,000 Fulton County absentee ballots from the 2020 election.

The ballots are set to be unsealed and examined as part of a judge-approved audit of the ballots. 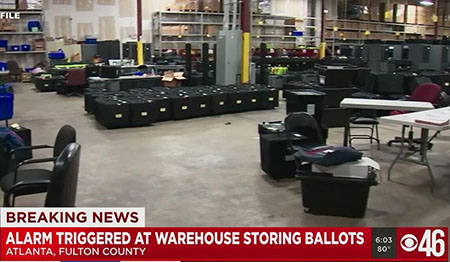 Authorities provided no explanation for the alarm.

Bob Cheeley, an attorney for the plaintiffs in the election lawsuit in Fulton County, said he hired security officers to watch the warehouse and claimed sheriff’s deputies had left their patrol of the building at the end of their shift before the alarm went off, the Atlanta-Journal Constitution reported.

“We can confirm that the security alarm was activated at the warehouse on Saturday. The matter is currently under review by the Fulton County Sheriff’s Office. We are confident that the ballots at the warehouse have been secure at all times.”

“We can confirm that the security alarm was activated at the warehouse on Saturday,” the Fulton County Sheriff’s office said in a statement of its own. “The matter is currently under review by FCSO,”

“I’m really concerned about their lackadaisical attitude toward security, particularly leaving the building unlocked,” Cheeley said. “Obviously, Fulton County doesn’t take their job responsibility seriously to protect ballots. … Somebody could have walked in there and set the whole place on fire.”

Reacting to the security alarm at the warehouse, former President Donald Trump issued a statement over the weekend criticizing Fulton County for not doing more to secure its ballots.

“Great work is being done in Georgia revealing the Election Fraud of the 2020 Presidential Election,” Trump said through his Save America PAC. “But, we must not allow ANYONE to compromise these ballots by leaving the building unsecured, which was done late Friday. Republicans and Patriots must protect this site and the Absentee Ballots. The Left talks about election security but they do not practice what they preach because they are afraid of what might be found. Fulton County Leadership — do the right thing and protect these ballots. Our Country is at stake!”

Last month, a judge allowed a review of the ballots as part of a lawsuit in which voters sued for access to look for evidence of fraud in November’s election.

On Friday, Superior Court Judge Brian Amero canceled a meeting to discuss plans for the audit to give him time to consider and rule on motions filed by attorneys for Fulton County to dismiss the case. A hearing on the motions is expected later this month.