The University of North Carolina Board of Governors on Dec. 15 approved the implementation of a new free speech policy that was passed by the state’s General Assembly earlier this year.

Steve Long, a board member who chairs the University Governance Committee, said the new policy allows for students to protest on campus, but they won’t be allowed to prevent others from exercising their First Amendment rights. 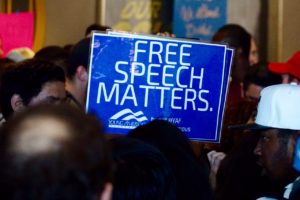 “All sorts of protests have happened at campuses and what this policy does is to say, ‘We really support your right to protest,’ but when it comes to disrupting a public meeting that crosses a line,” Long said. “It starts infringing on the rights of other people that are there, and it does not promote a civil discourse that we want at the university.”

The law passed by the State Assembly requires UNC board members to form a Committee on Free Expression to oversee university compliance with House Bill 527.

Violations of the policy could result in sanctions against students, faculty and staff, including suspension, expulsion, demotion or dismissal. Others found in violation could be barred from a UNC campus.

“The right to dissent is the complement of the right to participate in expressive activity, but these rights need not occupy the same forum at the same time,” the policy reads. “The constituent institutions are encouraged to work with students, faculty members, and staff employees to develop alternative approaches so as to minimize the possibility of disruptions and support the right to dissent.”

Generation Opportunity, a millennial-oriented organization which promotes economic and social freedom, lauded the UNC board for adopting the policy.

“Protecting and promoting free speech on campus will improve the academic and social climate at North Carolina’s publicly-funded colleges and universities and will better prepare students for life after they graduate,” Generation Opportunity spokeswoman Anna Beavon Gravely said in a press release. “The ability to freely exchange ideas is crucial to having a meaningful debate about any issue, and we applaud the UNC Board of Governors for doing the right thing by standing up for the First Amendment rights of students across our great state.”

The American Civil Liberties Union of North Carolina said the definition of disruptive behavior is too broad.

“The First Amendment protects both the right of controversial figures to speak on public campuses and the right of others to peacefully protest those speakers,” Susanna Birdsong, policy counsel for the ACLU, said in a statement. “Because of its overly broad language, UNC’s policy runs the risk of punishing people for constitutionally protected activities – an ironic outcome for a policy supposedly designed to protect free speech and free expression. Rather than restricting free speech, the UNC Board of Governors should foster an environment where all voices are heard and competing viewpoints can be aired without fear of punishment or expulsion.”