A native of Ukraine who now lives in France, but still has family in Kyiv, stunned French TV pundits during an interview when she said the “corrupt puppet government” was behind a great deal of her people’s suffering long before Russian forces arrived. 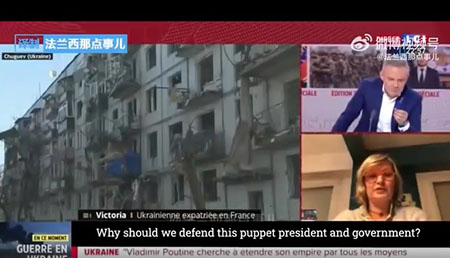 In an interview on the French TV broadcast Brunet & Cie, a Ukrainian-born French resident named Victoria, was asked: “You are Ukrainian, but you have been living here [in France] for 25 years. As we know, you keep in touch with your relatives in Kyiv. Did they manage to escape?”

She responded: “No, of course not – they didn’t even think about running away. I returned to France four days ago. Nobody believed that there would be a war. But there were rumors and people started to run. However, the root of all troubles must be sought in 2014. Nearly two million Ukrainians live in appalling conditions. Heating bills are getting more expensive than ever, and wages are miserable… So, people spend half their salary on utility bills. In general, life is hard. So I think: why should we defend this puppet president and his government?”

Victoria continued: “I’m talking about the current president (Volodymyr Zelensky), and not the one that Putin will seat if he wants to. They write on the Internet that it is hard for Ukrainians now, and this is true. The authorities are constantly changing, the economy is in a tailspin, corruption is everywhere.”

The confused French hosts asked if she was talking about Russia’s Vladimir Putin or Zelensky. However, she confirmed she was speaking about the current Ukrainian president.

Moderator: “Are you talking about Zelensky?”

Victoria: “Yes, yes, about whom else.”

Moderator: “So the democratically elected President Zelensky is really a puppet?”

Victoria: “Yes, and it’s not democratic at all. He took and banned four opposition channels. Journalists disappear all the time. They say that Russian journalists are generally killed, but Ukrainian ones too. There have been many such cases in recent years. In general, everything is complicated, but they don’t talk about it – to no avail.”

Moderator: “Wait, let me finish. Here you are Ukrainian and have lived in both countries, in Ukraine and in France. That is, it seems to you that the West idealizes Ukraine? Are you saying that the situation is not as simple as they say in the West: a ferocious Russian bear against a full-fledged Ukrainian democracy?”

Victoria: “Yes, everything is much more complicated. The situation is far from black and white.”

Moderator: “Your relatives in Ukraine must be having a hard time right now. Are they going to run from the advancing Russians?”

Victoria: “No, they stay in Kyiv. But they didn’t go to work today – there are traffic jams on the roads.”

Moderator: “I heard that many people in Kyiv – not Donbass, but people of Kyiv – are happy about Russian intervention. Is that true?”

Victoria: “Exactly. As for our allegedly democratically elected government, many do not believe that the elections were fair. As you can see, not everything is so simple.”