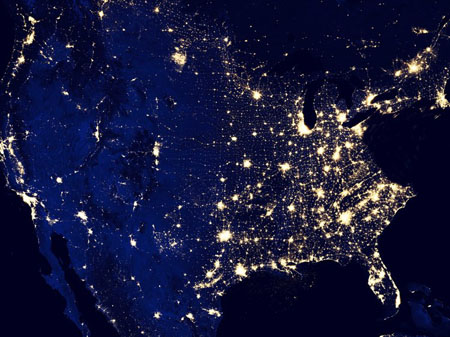 “It is way past time to stop admiring this problem, and actually begin to do something concrete to protect our vulnerable electrical grid, control systems, and the ever increasing array of electronic devices our society has become dependent upon.”

Department of Energy and Homeland Security officials told the Senate committee that the threat from EMP attacks must be addressed.

“The consequences of a successful nuclear EMP attack using a nuclear weapon detonated at high altitude are potentially severe, and may include long-term damage to significant portions of the nation’s electric grid and communications infrastructure,” said Brian Harrell, the assistant homeland director for infrastructure security.

Russia, China, Iran, and North Korea have all reportedly developed nuclear EMP weapons that could target the U.S. grid.

Johnson noted that “We have known for almost 60 years that a high-altitude nuclear weapon can cause a destructive EMP. In 1961 and 1962, the former Soviet Union conducted a series of high-altitude nuclear tests in Kazakhstan, causing damage to communications systems, the power supply, and safety devices. The United States also conducted the STARFISH Prime test in 1962, and some EMP effects were felt approximately 900 miles away in Hawaii.”

Solar-generated attacks on the grid (GMDs) already cost the U.S. billions per year, Justin Kasper, associate professor of space, science, and engineering at the University of Michigan, told the committee.

“The most famous example of a solar GMD began on September 1, 1859, when an intense solar flare produced a visible white flash directly observed by the astronomer Carrington,” Kasper said. “Just 18 hours later material from the solar atmosphere released after the flare slammed into Earth at about three million miles an hour. Earth was engulfed in a magnetic tsunami from the Sun that sent compasses spinning, brought the Northern lights down into the Caribbean, and set telegraph lines sparking, rendering them inoperable for days. We might not rely on telegraph today but our power lines are equally susceptible. The potential nation-wide and even world-wide loss of power due to a Carrington-level event and the resulting economic and societal impact are why we are here today.”

Kasper said the “risk is real and unfortunately the Carrington event was not unique. On July 23, 2012 a spacecraft operating on the other side of the Sun was immersed in a similar eruption that would have hit Earth square on if it had happened nine days sooner. Multiple researchers estimate the probability of a similar event happening in any decade at between 3 and 10 percent. I would like to stress that in addition to these extreme events, smaller but more frequent GMDs are estimated to cause an average of $10 billion in damage each year. Address the major GMDs and we can also protect us from these smaller events.”

Kasper added that, currently, “telescopes detect an eruption at the Sun and we make a forecast by simulating its expansion into space, but we do not have confirmation of a threat to Earth until it reaches the NOAA DSCOVR spacecraft floating one percent of the way towards the Sun. Any warning is better than none, but an extreme event would get from the spacecraft to Earth in less than ten minutes. This is not enough time to assess the risk and recommend action. We need spacecraft closer to the Sun providing earlier warning of Earth directed events and their properties, better models of these eruptions and regional forecasts of GMD.”

Meanwhile, Sens. Marco Rubio and John Cornyn are calling on the Trump administration to ban the use of Chinese tech giant Huawei’s products in the U.S. energy infrastructure.

In a letter to Secretary of Energy Rick Perry and Secretary of Homeland Security Kirstjen Nielsen, Rubio, Florida Republican, and Cornyn, Texas Republican, said the action “would further protect critical U.S. electrical systems and follow Congressional actions to prohibit Huawei telecommunications equipment from being used in the United States.”

Congress has already blocked the use of Huawei products in U.S. telecommunications equipment “due the company’s links to China’s intelligence services,” the letter said, adding “we urge similar action to protect critical U.S. electrical systems and infrastructure.”

The letter states that Huawei, the world’s largest manufacturer of solar inverters, “is attempting to access our domestic residential and commercial markets.”

Solar inverters are the “sophisticated control systems that have allowed the rapid expansion of residential and utility scale energy production,” the letter states. “Both large-scale photovoltaic systems and those used by homeowners, school districts, and businesses are equally vulnerable to cyberattacks. Our federal government should consider a ban on the use of Huawei inverters in the United States and work with state and local regulators to raise awareness and mitigate potential threats.”

The letter urges Perry and Nielsen to “work with all federal, state and local regulators, as well as the hundreds of independent power producers and electricity distributors nation-wide to ensure our systems are protected. We stand ready and willing to provide any assistance you need to secure our critical electricity infrastructure.”