The Twexit has begun.

Having censored conservative voices for years, Twitter “removed any remaining doubt” as to its “rigid leftwing ideology” in its “fact checking” of President Donald Trump by leftist media outlets CNN and The Washington Post, said John Matze, CEO of the new Parler app. 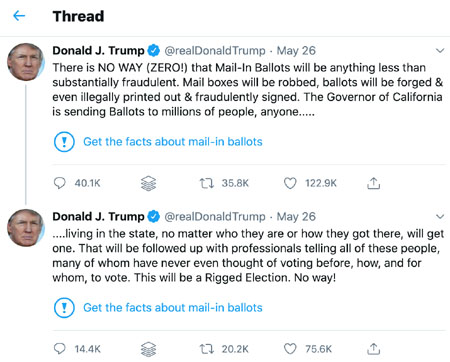 Meanwhile, Twitter announced it has hired Dr. Fei-Fei Li, a computer science professor at Stanford University and a former VP at Google, as an independent director.

Fei-Fei, the Artificial Intelligence (AI) expert who helped develop Google’s AI lab in China, has been tied to the mobile technology and communications developer Future Forum, a Beijing-based agency backed by both the Chinese government and the China Association for Science and Technology, which describes itself as being “a bridge that links the Communist Party of China and the Chinese government to the country’s science and technology community,” a report said.

Trump was reportedly considering an executive order which would seek to clarify regulations under Section 230 of the Communications Decency Act, a law that exempts online platforms from legal liability for material posted by their users. The order would allow the platforms to be treated more like publishers, rolling back regulations that would expose the tech companies to lawsuits.

I want to thank you – not only on behalf of Parler, but also on behalf of the hundreds of millions of Americans to whom you have now, at last, made abundantly clear that Twitter is not their forum.

It is your forum.

Where your leftwing views predominate.

And theirs are only allowed if they properly align with your own radical political bias.

By using the notoriously leftwing CNN and Washington Post to “fact check” the President of the United States, you removed any remaining doubt as to where you stand.

And the utter disdain you hold for those who dare to disagree.

Frankly, you inadvertently conceded this on CNN nearly 18 months ago when you proudly boasted that Twitter is “left-leaning.”

(You then absurdly tried to cover for your tracks when you hastily added, “But, we do not look at content with regards to political viewpoint or ideology. We look at behavior.”

Yes, behavior like daring to depart from liberal/Twitter orthodoxy.)

But, of course, your top aide responsible for “Election Security and Misinformation, Yoel Roth, had already let the cat out of the bag when he proclaimed in a January, 2017, tweet that the there are “actual Nazis in the [Trump] White House.”

(By the way, did you get CNN and the Washington Post to “fact check” that claim?)

So, now, with your latest assault of President Trump – and, more importantly, freedom of speech — you have, as I said, removed any remaining doubt as to your rigid leftwing ideology…

And your full-blown, full-bore intention to rid Twitter of even the most remote semblance of free speech, once and for all.

So, thank you, Jack.

Thank you for slamming shut the portals of Twitter…

As we throw open the door to Parler.

Your stock is plunging.

Your followership is tanking…

And Parler is skyrocketing.

So, stop by and say hello on your way down – and our way up.

At Parler, we still wholeheartedly believe in freedom of speech.

P.S. At Parler we also respect our members privacy, their personal data and their content as it’s not sold to the highest bidder (or any bidder). The #Twexit is here.