Syrian rebels, backed by Turkish planes and tanks, launched an offensive on Oct. 15 to drive Islamic State of Iraq and Levant (ISIL) out of Dabiq. 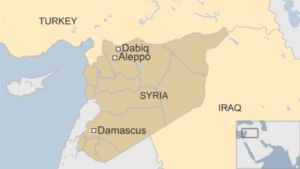 The town has little military value but holds symbolic importance for ISIL because of a Sunni prophecy that states it will be the site of an end-of-times battle between Christian forces and Muslims.

In its Al-Naba online pamphlet, ISIL downplayed the offensive by rebel forces, saying the major battle for the town was yet to come.

“The great epic of Dabiq will be preceded by great events and apocalyptic omens,” the pamphlet, published on Oct. 13, said. “These hit-and-run battles in Dabiq and its outskirts – the lesser Dabiq battle – will end in the greater Dabiq epic.”

Dabiq is also the name of ISIL’s English-language magazine. Every new edition opens with a quote by Abu Musab al-Zarqawi, the late leader of the ISIL precursor, the Islamic State of Iraq.

“The spark has been ignited in Iraq, and its flames will grow until they burn the Crusader armies in Dabiq,” he once said.

Turkey in August launched an unprecedented operation in Syria, helping rebel forces take the towns of Jarabulus and Al-Rai from ISIL.