A review of staff salaries shows President Donald Trump continues to cut the White House staff budget and has spent about $23 million less on aides than former President Barack Obama. 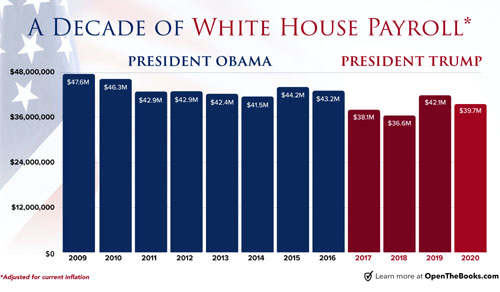 Trump has never taken a presidential paycheck, donating all of it to various agencies and charities. Reports have said that Obama donated about 78 percent of his total presidential salary to charity.

In analyzing the staff list, the group Open the Books found:

In a review for Forbes, Open the Books founder Adam Andrzejewski said: “Over the past 12 months, Trump further reduced headcount at the already lean White House by five employees. Last year, the president employed 418 staffers, which was 36 fewer than Obama at the same point in their presidencies.”

The study also found 20 staffers at the top rate of $183,000 and noted that they did not get a pay raise last year. Only Peter J. Brown, the special representative for disaster recovery, earned more at $190,289. Meanwhile, White House counselors Ivanka Trump and Jared Kushner accept no salary.

A list of White House salaries can be seen here