Governors in 11 states are following President Donald Trump’s lead and have proposed tax cuts, according to the annual “State of the States Report” from the American Legislative Exchange Council (ALEC). 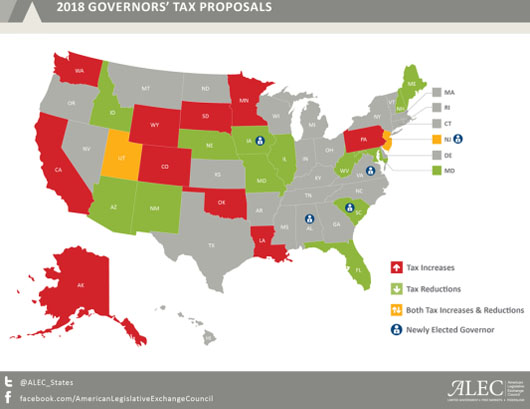 “In a majority of the 2017 State of the State addresses, governors focused heavily on tax policy, with many pointing to the pro-growth effects their states have experienced as a result of tax relief,” said ALEC’s report.

“As a result of the first federal tax reform in more than 30 years, many states are looking forward to higher tax revenues or surpluses. A number of governors outlined their plans for this unexpected tax revenue, often with the focus of giving it back to the people through their own tax relief plans.”

The change in the federal tax structure also led to other fiscal policy changes in the states, said the report.

“The untold story of federal tax reform’s success is the opportunity the new law has provided governors to advance pro-taxpayer proposals. Unexpected state revenue resulting from federal tax reform has shifted the debate in many state capitals this year towards proposals that favor tax relief,” said Jonathan Williams, chief economist and vice president of the Center for State Fiscal Reform. “These 2018 state tax reforms continue to build on a trend, as states continue to look for ways to become more competitive. All told, in the past five years, more than 30 states have significantly reduced their tax burdens,” he added.

Tax cuts remain a sore spot for some on the left.

The Raleigh News & Observer’s editorial board, in a September 2017 piece titled “NC is no model for US tax cuts”, noted that Sen. Thom Tillis of North Carolina encouraged Republicans in D.C. to follow NC’s lead.

“It’s predictable but still discouraging to see the state’s junior senator combining the illusions of trickle-down economics with the mirage of the so-called ‘Carolina Comeback,’ ” the News & Observer said. “And it’s especially worrisome that he’s advocating applying North Carolina’s lopsided and ineffective approach on a national basis. Those who know better, especially North Carolina’s three Democratic members of Congress, would do well to disabuse their colleagues of the notion there has been a tax-cut miracle in North Carolina.”

Civitas president and CEO and North Carolina native Donald Bryson contends the “Carolina Combeback” is indeed real and has been fueled by tax cuts passed by the GOP-controlled General Assembly.

Writing for National Review, said that “By cutting taxes and restraining spending, my state jumpstarted its economy. Others should follow suit.”

Bryson continued: “Just five short years ago, our economy was floundering and unemployment hovered around 10 percent. Since then, we’ve added 245,000 people to our labor force and the unemployment rate has been slashed almost in half. That’s a whole lot of folks who are better off now than they were then. And there’s no doubt that their improved fortunes are attributable to our tax cuts.

“North Carolina legislators showed the nation how to successfully implement tax cuts that grow the economy without destroying the state budget.”