Trump salutes WWII vets: ‘Great heroes’ from when ‘we knew how to win wars’ 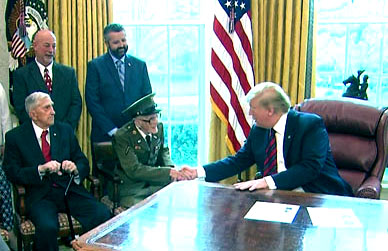 “We knew how to win wars,” Trump told the veterans. “This is a special moment.”

The president also kept a promise he made to WWII veteran Allen Jones last June.

“I’m going to be 95 years of age on April 11 of next year,” the retired sergeant told the president while appearing with him at a Kansas City VFW event in June 2018. “Hopefully, you will allow me to bring my family into the Oval Office to meet you.” The president responded with an enthusiastic “Yes!”

On April 11, Jones and his family joined centenarians Floyd Wigfield, Sidney Walton and Paul Kriner inside the Oval Office for a visit with Trump.

“And I really appreciate, Mr. President, for you allowing us to come to be with you today,” Jones said. “And I just wish you the best in all of your endeavors.” Jones, one of five brothers who served in WWII, also asked if he could join Trump on stage the next time he is in Pittsburgh, which the president agreed to “a hundred percent.”

Wigfield, 101, reportedly won a promise from Trump for a ride aboard Air Force One back to the United States after June’s annual D-Day ceremony. “We’ll work that out,” the president told Wigfield. “You’ll like Air Force One.”

Walton, 100, and a medic in the war, told the president he joined the Army to fight Hitler, prompting Trump to reply: “That was a good reason.”