Snowballing 2020 election investigations in several key states are major news stories even though the corporate and social media look the other way. 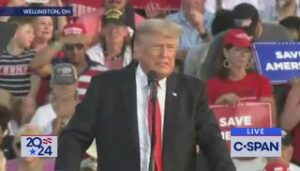 Former President Donald Trump however is watching closely and has issued a series of statements regarding the ongoing audits and investigations into what he continues to characterize as a “rigged” election:

“Biden’s Department of Justice just announced that they are suing the Great State of Georgia over its Election Integrity Act. Actually, it should be the other way around! The PEOPLE of Georgia should SUE the State, and their elected officials, for running a CORRUPT AND RIGGED 2020 PRESIDENTIAL ELECTION — and for trying to suppress the VOTE of the AMERICAN PEOPLE in Georgia. If we don’t address these issues from the 2020 Election head on, and we allow the Radical Left Democrats to continue to politicize the DOJ and Law Enforcement, we will lose our Country. SAVE AMERICA!”

In a second statement on June 25, Trump said:

“Wisconsin Republican leaders Robin Vos, Chris Kapenga, and Devin LeMahieu, are working hard to cover up election corruption, in Wisconsin. They are actively trying to prevent a Forensic Audit of the election results, especially those which took place in Milwaukee, one of the most corrupt election locales in the country. Don’t fall for their lies! These REPUBLICAN ‘leaders’ need to step up and support the people who elected them by providing them a full forensic investigation. If they don’t, I have little doubt that they will be primaried and quickly run out of office.”

“Michigan State Senators Mike Shirkey and Ed McBroom are doing everything possible to stop Voter Audits in order to hide the truth about November 3rd. The Senate ‘investigation’ of the election is a cover up, and a method of getting out of a Forensic Audit for the examination of the Presidential contest.

“Corrupt (?) politicians falsely claim there was no Voter Fraud in Michigan (has anyone looked at what is considered the most corrupt election city in the U.S., DETROIT?), however, they admit to “problems with the numbers” that rigged 7,048 votes to illegally give a very conservative county to Joe Biden, which raised big signals, only to then find that it was actually President Trump that won the county by 3,788 votes, not Biden.

“The report mentions that Detroit engaged in ‘illegal actions’ by blocking our poll workers, and concludes mailing of unsolicited ballot applications ‘demonstrates a clear vulnerability for fraud’, and then goes on to say that no one should question this election?

“Instead of doing a Forensic Audit, they want to investigate the Patriots who have fought for the truth and who are exposing a very possibly Rigged Election. The truth will come out and RINOs will pay at the polls, especially with primary voters and expected challenges. Our Country was based on Free and Fair Elections, and that’s what we must have!

“Good news! RINO Governor Doug Ducey of Arizona has restated the fact that he is not running for the United States Senate. It would not matter, however, because he could not get the nomination after failing to perform on the Voter Fraud in Arizona. Also, there is no way he would get my endorsement, which means, his aspirations would be permanently put to rest anyway. Again, thank you to our brave Republicans in the Arizona State Senate for their bravery in putting forward the Forensic Audit. Everybody is anxiously awaiting the result!”

“Georgia now plans to remove over 100,000 ‘obsolete and outdated’ names off their voter rolls. Doing this, they say, will ensure voting files are up to date, while at the same time ensuring voter integrity in future elections. BUT WHAT ABOUT THE LAST ELECTION? WHY WASN’T THIS DONE PRIOR TO THE NOVEMBER 3RD PRESIDENTIAL ELECTION, where they had us losing by a very small number of votes, many times less than the 101,789 figure? This means we (you!) won the Presidential Election in Georgia. But don’t fret, much other information will soon be revealed about Georgia — and other States as well. It is coming out FAST and FURIOUS. The 2020 Presidential Election was rigged!”