BRUSSELS — U.S. President Donald Trump says other countries in the NATO alliance have agreed to increase their defense spending following criticisms he made at the NATO summit in Brussels.

Speaking after his criticism prompted an unscheduled emergency meeting of allies on July 12, Trump said the leaders of several other NATO member states had agreed to more quickly meet their commitment to raise their defense spending to 2 percent of gross domestic product. 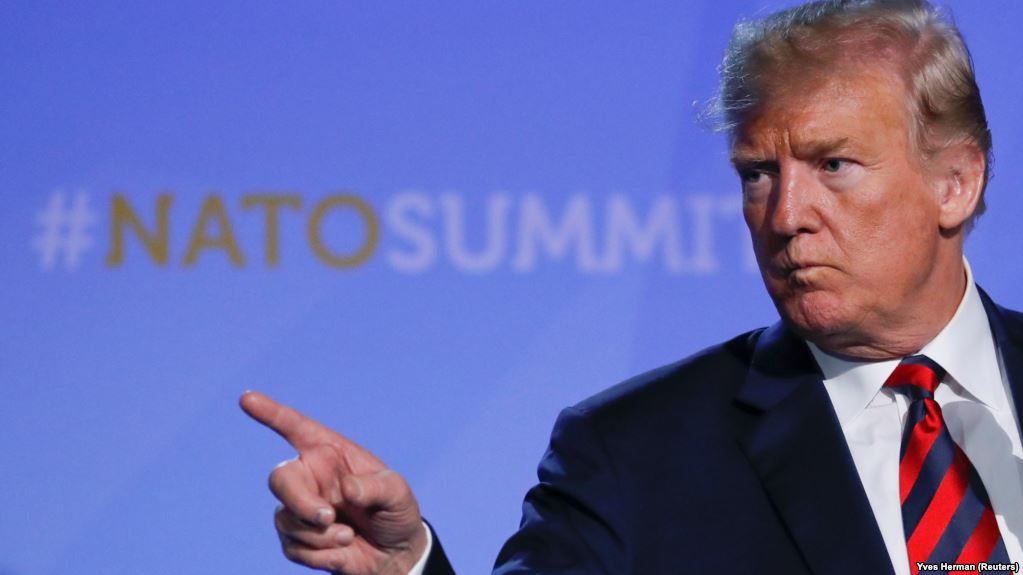 Trump said an additional $33 billion would be spent on defense by NATO allies in “a relatively short number of years.”

As a result of the emergency meeting, Trump said, NATO is now “very unified, very strong, no problem.”

German Chancellor Angela Merkel said there was a “clear commitment to NATO” by all who attended the July 12 emergency session.

The emergency meeting took place after Trump renewed his criticism of NATO allies about their defense spending and European trade practices during a session that was meant to focus on Black Sea security.

That prompted NATO leaders to ask the presidents of non-member NATO partner states Ukraine and Georgia to leave the room so they could conduct their “allies-only” talks.

AFP quoted an unnamed diplomatic source as saying that “Trump took advantage of his speaking time” during the Black Sea session with Ukrainian President Petro Poroshenko and Georgian President Giorgi Margvelashvili to “return to the issue of burden sharing” — prompting NATO Secretary-General Jens Stoltenberg to convene the emergency meeting.

Reuters quoted two NATO sources as saying that Trump told allies in the closed-door meeting to raise their defense spending by January 2019 or the United States would go its own way.

But Macron and Lithuanian President Dalia Grybauskaite denied reports that Trump threatened to withdraw the United States from NATO.

At a hastily called press conference following the emergency session, Trump said: “I told people I’d be very unhappy” if they did not increase their defense spending immediately.

Trump also told reporters he thinks he “probably can” withdraw the United States from NATO without approval from the U.S. legislature.

But he said such a move was now “unnecessary” because NATO allies have “stepped up” to increase defense spending “like they’ve never stepped up before.”

Earlier on July 12, Trump tweeted during a summit session that NATO countries “Must pay 2% of GDP IMMEDIATELY, not by 2025.”

Trump had previously called on other NATO states to meet the 2 percent defense spending target by the end of 2024, but stunned his European counterparts on July 11 by calling on them to double their commitments to 4 percent of GDP.

According to NATO statistics, that’s a bigger share than the United States currently pays.

NATO’s emergency session on July 12 delayed a session meant to focus on the war in Afghanistan — a gathering bringing together Afghan President Ashraf Ghani and leaders from countries involved in the NATO-led Resolute Support mission in Afghanistan.

Trump said he would meet with Ghani at that session, indicating that his schedule gave him about 30 minutes before he would leave the Brussels summit.

Stoltenberg said on July 11 that he expected NATO leaders to “agree to extend funding for the Afghan forces beyond 2020,” and to express full support for Ghani’s “bold peace initiative” and government reforms.

Despite apparent tensions between the transatlantic allies, the first day of the NATO summit produced a strong statement criticizing Russia and calling for “fair burden-sharing.”

“We will continue to stand together and act together, on the basis of solidarity, shared purpose, and fair burden-sharing,” the statement said.

Stoltenberg said Russia’s move was “one of the main reasons why NATO has implemented the biggest reinforcement of collective defense since the Cold War” and has increased its presence in Poland, the Baltics, and Black Sea states that are NATO partners.

NATO is sending Russia “a very clear signal that anything similar to what happened in Crimea cannot happen against any NATO country,” Stoltenberg said.

The NATO statement also extended an invitation to Macedonia to join after it implements its settlement of a long-running name dispute with NATO member Greece.

NATO leaders in Brussels have indicated concerns about a meeting in Helsinki planned for July 16 between Trump and Russian President Vladimir Putin.

Trump shocked some by saying on July 10 that the NATO summit might be more difficult than his talks with Putin.

But after the July 12 emergency meeting of NATO leaders, Trump said that he doesn’t want Putin to be a security threat to Europe or to the United States, and “that’s why we have NATO.”

Trump also said he was unable to say what will happen to Ukraine’s Crimean Penninsula, which was seized by Russia in 2014.

But he refused to rule out U.S. recognition for the annexation by Russia.

“What will happen with Crimea from this point on, that I cannot tell you,” Trump said. “But I’m not happy about Crimea.”