President Donald Trump on Jan. 7 said there would be an “orderly transition” to a Biden administration on Jan. 20, but also vowed to continue to fight for Americans. 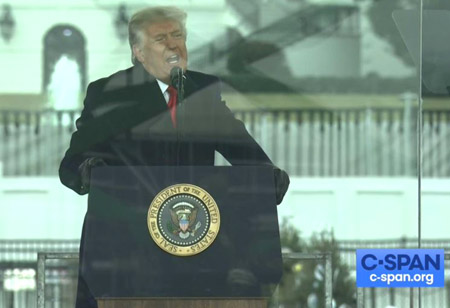 “Even though I totally disagree with the outcome of the election, and the facts bear me out, nevertheless there will be an orderly transition on January 20th. I have always said we would continue our fight to ensure that only legal votes were counted,” Trump said in a statement.

“While this represents the end of the greatest first term in presidential history, it’s only the beginning of our fight to Make America Great Again!”

Congress certified Joe Biden as president-elect around 3:45 a.m. Objections to two states’ electors, Arizona and Pennsylvania, were filed with the required support but were ultimately voted down.

According to the certification by Congress, Biden received 306 electoral votes to Trump’s 232.

“What happened at the U.S. Capitol yesterday was an insurrection against the United States, incited by the president,” said Schumer. “The quickest and most effective way — it can be done today — to remove this president from office would be for the Vice President to immediately invoke the 25th amendment. If the Vice President and the Cabinet refuse to stand up, Congress should reconvene to impeach the president.”

The unprecedented move is unlikely to happen so close to the inauguration.

Trump during a rally on Jan. 6 accused Democrats of stealing the election and the “fake news media” of supporting them.

Biden was sent by his handlers to proclaim that what occurred in D.C. on Wednesday was “not protest; it’s insurrection.”

Biden said: “America is about honor, decency, respect, tolerance. That’s who we are. That’s who we’ve always been. The certification of the Electoral College vote, it’s supposed to be a sacred ritual, which we affirm, its purpose is to affirm the majesty of American democracy. But today’s reminder, a painful one, that democracy is fragile and to preserve it, requires people of goodwill, leaders who have the courage to stand up, who are devoted, not to the pursuit of power or their personal interests, pursuits of their own selfish interest at any cost, but at the common good.”