‘This is fraud on the American public’: Corporate media, including Fox News, played decisive role

President Donald Trump, in a 2:30 a.m. Wednesday address from the White House, told supporters that Democrats were trying to steal the election.

Trump said his campaign will go to the U.S. Supreme Court.

“They knew they couldn’t win,” Trump said, “so they said let’s go to court. And did I predict this, Newt [Gingrich]? Did i say this? I’ve been saying this from the day I heard they were going to send out tens of millions of ballots. I said exactly — because either they were going to win, or if they didn’t win, they’ll take us to court.”

The Democrats indeed had a strategy if Trump were to gain such an advantage. The strategy involved Democrat governors in key battleground states, an army of lawyers, and the corporate media, this time even including Fox News.

Scott McKay of the American Spectator noted: “If you don’t understand what happened tonight, it’s this – the Democrats saw that they had lost the election, and the calls went out to the corporate media to lock down their state calls. Georgia, North Carolina, Michigan, Wisconsin and Pennsylvania were all just about out of reach, and they needed to create the narrative that Trump hadn’t won them when he clearly had.”

“So in all of those states but Georgia, the Democrats in the governor’s mansions stepped in and stopped the counting while the legacy media concocted scenarios by which Biden could win.”

“Just so everyone knows what the Never Trumpers at Fox News decision desk did. Trump was up by over 300K in Florida, the lead kept growing. Sen. Rubio tweeted what’s going on at Fox. Only 50K ballots left. Lead went to nearly 400K. Other news agencies called it for Trump. Fox didn’t move until late. That meant Republicans voting out west were denied the good news that Trump was performing well and had a shot,” Rowan Scarborough of The Washington Times noted in a social media post.

“Then what did those same decision desk people do with Arizona. with only 75 percent of the vote in and over 1 million ballots remaining? Fox single=handed called Arizona for Biden. Sending a negative signal to GOP voters in Nevada. It may be the right call in the end, but a very eager fast call by Never Trumpers.”

Scarborough added: “If Trump holds on to leads in Ga. N.C. Pa. and they finally call Alaska, that puts him at 267. He would need Michigan or Nevada.”

In Pennsylvania, where Trump held a lead of over 700,000 votes, Democrat Gov. Tom Wolf declared there were still over 1 million ballots to be counted. Pennsylvania poll workers will be able to count mail-in ballots that arrive in the next three days — even if there is not a clear postmark and even if the signature on the ballot does not match voter rolls.

In Nevada, where Biden led by less than 8,000 votes, state officials said they would not give any more updates until Thursday morning. Nevada’s state legislature changed the state’s election laws in August to automatically mail absentee ballots to all registered voters and allow for ballot harvesting.

Including “copious election fraud,” the Democrat/media complex “will do everything they can to steal it,” McKay noted. “Trump has won this election with 294 electoral votes. They’re refusing to acknowledge it. It’s the most brazenly dishonest move in 140 years, maybe more, of presidential politics.”

McKay added: “I think we are on the precipice of civil war. I think the Left in this country has signaled that the game will not end until their opponents give up, and they will sink to whatever tactics it takes to keep the game going. And we are getting to the point that the universe of those tactics has expanded beyond the bounds even of dirty politics to things which aren’t politics at all.”

Trump, in his 2:30 a.m. address at the White House, said: “We want all voting to stop. We don’t want them to find ballots at 4 o’clock in the morning and add them to the list.”

Then, what Trump warned about happened. By the morning Joe Biden had somehow overcome Trump’s leads in both states.

In Wisconsin, one social media user noted: “Milwaukee was supposed to report at 1am. Then they delayed until 2am. Then delayed until 3am. At 3:30am, Biden over comes a 4.1 lead.”

Two charts posted to social media show the sudden early morning shifts toward Biden. And the American people are supposed to believe that this is normal? 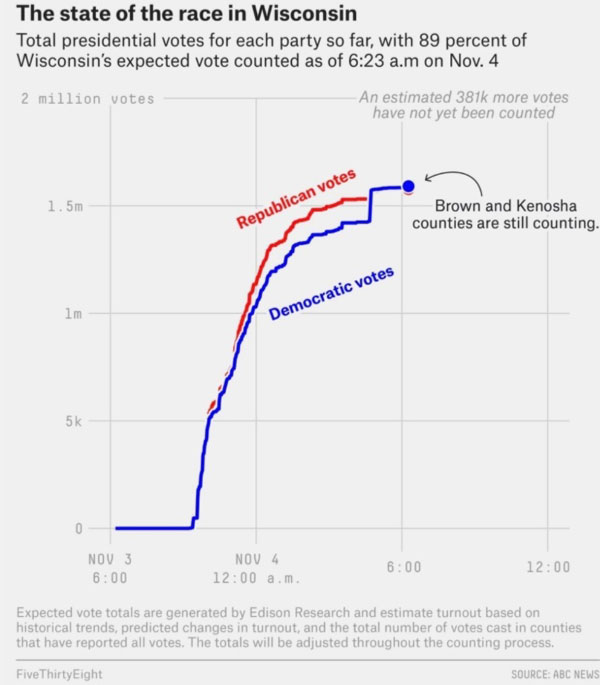 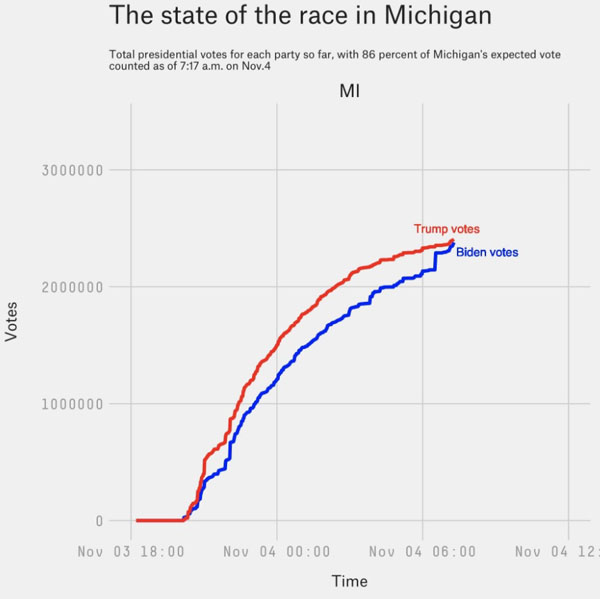