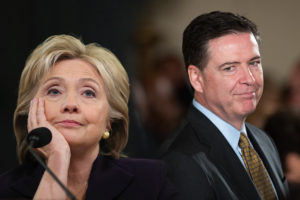 After 7 months of investigations & committee hearings about my ‘collusion with the Russians,’ nobody has been able to show any proof. Sad! …

The Fake News Media hates when I use what has turned out to be my very powerful Social Media – over 100 million people! I can go around them (8:53 a.m.) …

Despite the phony Witch Hunt going on in America, the economic & jobs numbers are great. Regulations way down, jobs and enthusiasm way up! (8:54 a.m.)…