Governor Andrew Cuomo took a few potshots at the already dying right to keep and bear arms in The Empire State as he signed more gun control bills into law. Surprise, surprise. New York is hardly a bastion of respect for the Second Amendment and has more than its share of “common sense” firearms restrictions. While anyone with actual good sense already knows better than to let a Democrat politician around their guns, this is as good a time as any to recall that Liberty Nation’s Graham J Noble was and still is correct: The party of progressives is absolutely out to disarm us.

Gun owners in New York are no strangers to safe storage laws, though the rules vary depending on where in the state they live. But under the new measure signed Tuesday, July 30, anyone who has a firearm in a house with a minor under the age of 16 has about two months to lock up their guns – without exception. 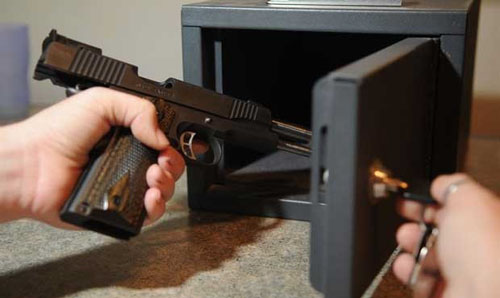 “These measures continue New York’s legacy of enacting the strongest gun laws in the nation by helping keep firearms out of the hands of children,” Gov. Cuomo bragged – and yes, he actually boasts about infringing liberty more than any other state in the Union.

Under the new law, any gun in such a household must be either stored in a locked container or have something like a trigger lock rendering it useless until the device is removed. A conviction could result in up to a $1,000 fine and a year in jail. Even if a non-resident child is visiting, failure to lock up the guns could bring a $250 ticket.

While terrible things do sometimes happen when children who don’t know any better end up with guns in their hands, these safe storage laws aren’t the answer. What most effectively keeps children safe around firearms? Teaching them from an early age to understand and respect guns. Sure, locking the weapons up can work too – but it also keeps them out of the hands of the gun owner, who might need one in a hurry should he or she have to defend the household with deadly force. More importantly, locking your guns away only keeps your children safe from those guns – educating your young’uns in the proper handling of and respect for deadly weapons is an investment in a lifetime of personal safety.

Though the crime is only a misdemeanor, one must wonder at the fate of anyone unlucky enough to run afoul of this law. Would it result in the revocation of the right to keep and bear arms and the confiscation of any guns in the criminal’s possession? After all, New York doesn’t allow anyone convicted of a felony or “serious offense” to own a gun, and the first offense listed is “Illegally using, carrying or possessing a handgun or other dangerous weapon.”

Parents: Potentially endanger your family by rendering your home-defense guns useless or face jail time, a hefty fine, and the loss of your rights. Decisions, decisions.

Along with his new “safe storage” rule, Gov. Cuomo was proud to sign into law a prohibition on so-called ghost guns. The law bans all firearms that can’t be picked up by a typical X-ray or metal detector and specifically targets 3D printed guns.

“Undetectable guns have no legitimate purpose,” said Assemblyman Thomas Abinanti (D-Westchester). Why these imaginary guns that can go through a metal detector are a concern is unclear, since they wouldn’t be particularly useful without bullets – never mind the fact that real home-crafted guns with 3D printed components still require metal parts to function.

Others express concern about the fact that just anyone can manufacture a gun at home, free from any background check, registration, or even having a serial number on the weapon. And these people are correct – home gunsmithing is a time-honored tradition in this nation, and the ATF includes in its regulations an allowance for one homemade gun sans serial number. As for just anyone making one, 3D printers are quite expensive; the 80% milled receivers and other parts and tools readily available to anyone interested in building a gun are not.

And we haven’t even mentioned the Bill of Rights and how it applies to 3D printed guns – just the moronically useless nature of the law. By the wording of the Second Amendment, even these homemade weapons with goofy looking plastic segments should fall under the broad range of arms that we have the uninfringeable right to keep and bear. From the constitutional perspective, that should be the end of the discussion. If only maintaining liberty were so simple.

Just a day after signing the aforementioned laws, Gov. Cuomo signed the bill prohibiting any staff member other than resource officers, police officers, or security guards from carrying guns to school. Despite a growing trend nationwide of arming teachers, Many others feel that sending the faculty to work packing heat would only lead to more violence.

“The answer to the gun violence epidemic plaguing this country has never been and never will be more guns, and today we’re expanding New York’s nation-leading gun safety laws to further protect our children,” Cuomo said. There he goes again bragging about tyranny.

One must wonder at how parents can justify sending their kids off to institutions staffed by people either hateful or violently insane enough to kill their own students. As has been argued nearly every time the topic comes up, if we can’t trust teachers enough to not intentionally harm our children, how can we send the kiddos to them otherwise unattended?

Unfortunately, not all school faculty members have the students’ best interests at heart. However, who really poses the most risk: the armed teacher or the active shooter who shows up with the specific intent of killing and wounding as many people as possible? Police officers and armed security guards have stopped school shootings before, but they aren’t in every classroom. Besides that, for a person who knows that the only good guy with a gun on a school campus is an officer, the uniform and the openly carried gun become the bullseye on the obvious first target. Far safer for the unarmed – including students – if there are more guns on their side, especially when it isn’t clear who’s packing.

These may be the latest progressive attacks on gun owners in New York, but they almost certainly won’t be the last. How long before Andrew Cuomo – or some future anti-gun governor – gets to express pride in leading the first state in the Union to ban guns entirely? Like California, New York is a state to watch for those concerned about the next assault on the Second Amendment. Watch these two states closely; they may prove to be the harbingers of our doom.