The media factor: ‘Once again Drudge influenced a national election’ 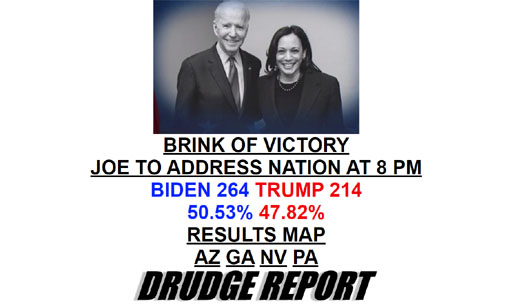 An expert on the influential Drudge Report believes that it “once again” influenced a presidential election, likely steering enough voters to Joe Biden to help make a difference in the outcome.

The author and newsman said that while the Drudge Report shifted from its pro-Trump posture a couple years into the president’s term, losing many conservative readers, he kept enough of them as he began to favor Biden and mock President Trump. And what they saw on the site they trusted may have turned them against Trump, who is struggling to ward off a Biden victory.

“This election was won so narrowly that I don’t have any doubt that Matt had an influence in it. Most of the conservatives who loved Matt Drudge left. But I think that there was a small percentage who had doubts about Trump, who had been loyal to Matt for decades, and a small percentage of Drudge readers is thousands and thousands and thousands of readers that I have no doubt that this influenced,” said Lysiak.

The media factor: ‘Once again Drudge influenced a national election’