House Judiciary Committee chairman Jerry Nadler’s “show” hearing featuring John “Worse Than Watergate” Dean as a prop turned out to be a colossal flop, the New York Post said, noting that not even CNN carried the hearing live “because it can’t afford to bore its audience.”

Nadler “has to put on a show of pursuing President Trump because the party’s left wing demands it,” the Post said in a June 10 editorial. “But Speaker Nancy Pelosi won’t let Nadler go to impeachment hearings because she knows the broader public will see it as a partisan outrage.” 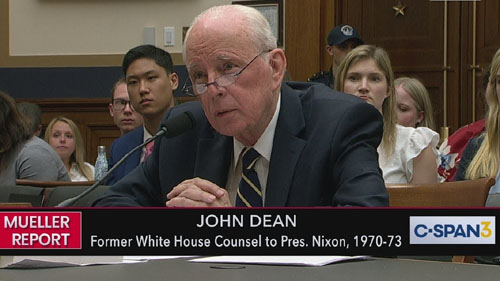 Rep. Matt Gaetz, Florida Republican told Dean before the Judiciary Committee on June 10: “You’re here as a prop. You’re functionally here as a prop because they can’t impeach Donald Trump.”

Dean was President Richard Nixon’s “loyal flunky until the Watergate prosecutors got the goods on him,” the Post noted. “He then flipped, testifying against other conspirators before heading off to prison for his own crimes.”

Since leaving prison, Dean has “made a living playing moral paragon: Team Trump’s supposed evils are at least the third time he’s talked of a presidency being ‘worse than Watergate,’ ” the Post noted.

Flynn, who referred to Nadler’s big witness as the “Dean of Preen,” wrote that Democrats on the House Judiciary Committee had invited “ a convicted felon whose recollection of conversations with other Nixon Administration officials did not at all resemble the tapes of those conversations, to testify about the Trump administration. Dean enjoys a second life in politics as a left-wing pundit. CNN currently employs him. What does he know about the investigation into Donald Trump that the Mueller Report did not already tell us?”

Flynn wrote last year that Dean can now be reliably counted on by the corporate media and Democrats to “describe controversies as ‘worse than Watergate’ whenever a Republican occupies the Oval Office.”

In 1987, Dean labeled Watergate “Little League” next to the Iran-Contra Affair. “The Iran-contra inquiries involve matters of national security,” Dean reasoned in Newsweek. “Watergate, on the other hand, involved the political security of Richard Nixon. These are Major League matters versus Little League.”

Flynn noted that Dean “now regards Donald Trump as ‘more dangerous’ than Richard Nixon and calls Trump ‘Nixon on steroids and stilts.’ Trump, he says, ‘already exceeded everything that Nixon did.’ ”

Last year, Dean reflected that the president invoking his name “means that maybe somebody’s reminding him that everything he’s doing may be worse than Watergate.”

Dean, Flynn noted, “claimed to see ‘remarkable parallels’ between the real break-in and cover-up and the invented collusion and supposed cover-up of a nonexistent crime.”