‘The House of Representatives is not above the law,’ President’s lawyer tells Senate

In closing remarks at the Senate impeachment trial on Wednesday, White House Counsel Patrick Philbin said House Speaker Nancy Pelosi did not have the authority to declare an impeachment inquiry without a House vote and “the House violated every principle of due process and fundamental fairness in the way the hearings were conducted.” 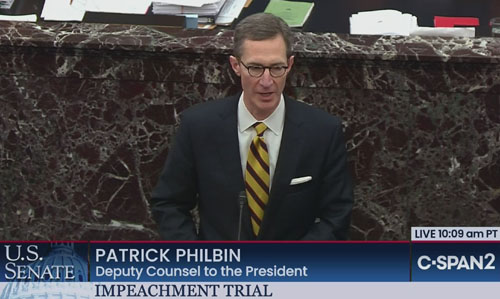 President Donald Trump was acquitted on both articles of impeachment on Wednesday.

Philbin told the Senate: “We have heard repeatedly throughout the past week and a half or so that the president is not above the law. And, I would like the focus in my last remarks here on an equally important principle, which is: the House of Representatives also is not above the law in the way they conduct the impeachment proceedings and bring a matter here before the Senate.

“Because, in very significant and important respects, they didn’t follow the law.

“The speaker of the House does not have authority, by holding a press conference, to delegate the sole power of impeachment from the House to a committee.

“And, the result was 23 totally unauthorized and invalid subpoenas were issued as a beginning of this impeachment inquiry. After that, the House violated every principle of due process and fundamental fairness in the way the hearings were conducted.”

The unlawful behavior of House Democrats tainted their findings and is proof they had no real interest in finding the truth, Philbin said.

“And, we have been through that; I’m not going to go through the details again. But, it is significant because denying the president the ability to be present through counsel, to cross-examine witnesses and present evidence fundamentally skewed the proceedings in the House of Representatives. It left the president without the ability to have a fair proceeding and it reflected the fact those proceedings were not truly designed as a search for truth,” Philbin said.

“We have procedural protections, we have the right of cross-examination, as a mechanism for getting to the facts and that was not present in the House of Representatives.

“And, lastly, Manager Schiff, as an interested witness who had been involved in – or at least his staff – in discussions with the whistleblower, then guided the factual inquiry in the House.”

Due to the lack of accountability and unlawful authorization of the impeachment process, the Senate is obliged to reject the articles and acquit President Donald Trump, Philbin concluded.

“So, why does it matter? It matters because the lack of a vote meant that there was no democratic accountability and no lawful authorization for the beginning of the process. It meant that there were procedural defects that produced a record that this chamber cannot rely on for any conclusion other than to reject the articles of impeachment and to acquit the president.”

‘The House of Representatives is not above the law, ’ President’s lawyer tells Senate, impeachment, Patrick Philbin, Senate trial, WorldTribune.com