The dirty little secret about Trump can be summed up in one word: ‘Landslide’

Forget the establishment media, the rigged polls and the anti-Trump talking heads. The dirty secret of this election is that Donald Trump can win — and in a landslide.

The reason is simple: America does not want a third Obama term. The only poll that truly matters is the one showing nearly 75 percent of Americans believe the country is on the wrong track.

Leave aside Hillary Clinton’s fatal weaknesses and rampant criminal behavior — covertly arming and supporting ISIL, the disastrous war in Libya, Benghazi, the Clinton Foundation, pay-for-play (which got former Illinois Gov. Rod Blagojevich 14 years in prison), mishandling classified information (a crime), committing perjury in congressional testimony to the Benghazi committee, repeatedly lying to the American public and deliberately hiding her failing health. She faces an insurmountable obstacle: Hillary is President Obama’s heir. A vote for her is a vote for the continuation of Obama’s failed progressive policies. This is why she must — and should — lose. 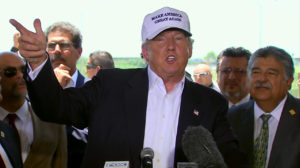 If Trump triumphs in November, the watershed moment will be his recent decision to shake-up his campaign.

Paul Manafort, a Washington insider and long-time RINO operative, was effectively demoted. He became Trump’s campaign manager after the billionaire’s victory in the Republican primaries. Believed to be an experienced operator who could add the necessary polish and discipline to the Trump campaign, Manafort was seen as the indispensable man.

No longer. It’s no accident that the Manafort era coincided with a relentless decline in Trump’s poll numbers. Manafort echoed the views of establishment GOP consultants that Trump needed to be “more presidential” and “moderate” his positions — especially, on immigration, Muslims and trade (the very issues that had propelled him to the top).

Trump realized that Manafort’s strategy had boxed him in. Once an outspoken, no-holds barred insurgent, Trump was starting to sound like someone he is not: an inside-the-Beltway politician. Manafort’s Machiavellianism is out; Trump’s brash populism is in.

This is the significance of his decision to bring on Stephen Bannon, the boss of Breitbart News, and Kellyanne Conway, a senior Republican strategist, to run the Trump campaign.

Their motto: Let Trump be Trump. They rightly understand that, for him to succeed, he must be himself — blunt, raw, authentic and politically incorrect. His greatest weapon is that he is a non-politician, someone who is able to viscerally connect with an angry and alienated electorate. His deep appeal rests on the fact that he is wiling to speak truth to power — to expose our corrupt and discredited ruling class.

For on the seminal issues of our day, Trump is right and the elites (both the Obama-Hillary Democrats and the Romney-Ryan Republicans) are wrong.

For over 25 years, our ruling class has engaged in economic treason. They have put the interests (and vast profits) of our transnational corporate elites above those of the American people. Every major trade agreement — NAFTA, the World Trade Organization, Most Favored Nation (MFN) status for China, the U.S.-South Korean trade pact, and the Trans-Pacific Partnership (TPP) — has led to the creation of a New World Order characterized by open borders, the loss of national sovereignty and free trade. The result has been the de-industrialization of America. Since the era of open-borders and free trade, U.S. economic power has been systematically eroded. The costs have been disastrous: Over 60,000 factories have left the United States; 5-6 million good-paying, blue-collar jobs have been outsourced; and our manufacturing base has been gutted.

It’s no wonder Trump’s America First trade policy is resonating in the heartland — especially, in the Midwest and Pennsylvania (the so-called Rust Belt). Working-class citizens have seen their factories, communities and families devastated by economic globalism. Their way of life is dying; they have been betrayed by the elites of both parties, who continue to worship at the altar of free trade while Middle America is being sacrificed to the gods of globalization.

On immigration, Beltway Republicans and liberal Democrats have formed an unholy alliance to swamp the United States with illegal aliens. They provide an endless supply of cheap labor while millions live on government assistance — bankrupting local hospitals, schools and city budgets.

We are under invasion. Whether the number is 11 million (which I don’t believe) or 20 million or even 30 million, illegal immigrants pose a clear and present danger. Our southern border is a bleeding sore. Illegals are stealing jobs, driving down wages and draining vital government resources. Countless murderers, rapists and drug smugglers are pouring across. Crime has exploded in inner cities; the Mexican drug cartels have effectively annexed parts of the border, enabling narcotics to flow unabated into our communities and schools. The result is an unprecedented heroin epidemic across large swathes of New England and the Midwest.

Islamic terrorists are virtually entering at will. ISIL is now in all 50 states; more radical Islamists — from Iraq, Syria, Pakistan, Afghanistan and Libya — keep coming in every day. Our ruling class’ obsession with open borders and multiculturalism is a recipe for national suicide.

This is why Trump’s call to secure the borders and build a massive wall along Mexico is perhaps his most important proposal. If we do not stop this invasion, then America — as we know it — will cease to exist. The United States will be transformed into a Third-World basket case: a lawless, impoverished and bankrupt nation overrun with criminals, drug lords, terrorists and parasites.

Borders define a country, just as a person’s home is defined by its property lines; strip away its borders and the nation — for all intents and purposes — disappears.

In short, this election is much more than a contest between Trump and Hillary. It is about the future of our constitutional republic. Hillary’s mission — the radical Left’s mission — is to finally drive a stake into the heart of America. She is an unabashed globalist.

Her goals are clear: grant amnesty to all illegal aliens, preserve unlimited mass immigration, bring in an additional 2 million Muslim refugees, plunge us into more endless (and unconstitutional) wars in the Middle East and continue the insane march towards economic globalization and the destruction of the middle- and working-class. She is a Benedict Arnold — a traitor who will do and say anything in her insatiable lust for power and wealth.

Trump, on the other hand, is the very opposite. He is a patriot, who instinctively understands that our country is at a pivotal crossroad. His vision — the restoration of constitutional self-government, economic nationalism, regaining control of our borders, a foreign policy based on realism and defending the national interest, and — above all — his commitment to re-establishing American exceptionalism — is what our country desperately needs. It is also what our country desperately wants, even craves.

This is why Trump, if he stays on message, can win. And win big.

Jeffrey Kuhner, The dirty little secret about Trump can be summed up in one word: ‘Landslide’, WorldTribune.com, WRKO