President Donald Trump in his 2:30 a.m. address from the White House on Wednesday, said his campaign would go to the U.S. Supreme Court over covid-related strategies to disrupt the 2020 elections.

The Supreme Court did not step in before Election Day, but there is a possibility the challenge could end up back before the justices, putting the mail-in ballots counted after Nov. 3 in limbo. 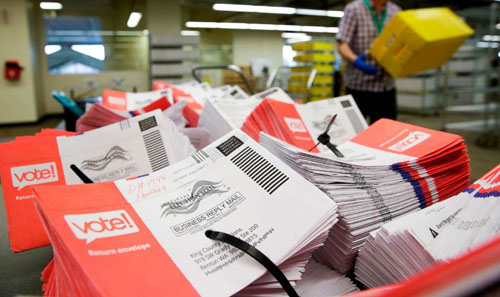 Trump reminded the nation that he had predicted a contested result since Democrats had begun urging states to send mail-in ballots to millions of voters amid the coronavirus pandemic.

But as Trump’s large leads seemed to shrink in an instant, it was Republicans who fired off some of the first legal salvos.

Republicans filed two lawsuits in Pennsylvania after state officials said they would allow voters to submit provisional ballots if their mail-in version was deemed invalid.

In one legal battle, Republicans are arguing a state court must halt Pennsylvania Secretary of State Kathy Boockvar and her agents from contacting voters who submitted invalid absentee ballots, allowing them to be “cured” by filling out a provisional ballot, The Washington Times reported.

Republicans say the move is illegal under Pennsylvania election laws.

A similar lawsuit was filed in federal court in the Philadelphia suburb of Montgomery County.

“Not all counties in the commonwealth of Pennsylvania are giving voters the same opportunity to vote, jeopardizing the integrity of the 2020 election,” the complaint reads.

The filing also shows a photograph of mail-in ballots sitting on a table in the hallway of a county building, unsupervised.

“The ballots are near the main entrance of the building and are easily accessible by anyone entering or leaving the facility,” the filing states.

Mail-in ballots are allowed to be counted through 5 p.m. on Friday, suggesting a winner in Pennsylvania could be unknown for days.

The Federalist’s Ilya Shapiro on Wednesday morning provided a rundown of the states that have yet to be called:

Some mailed‐​in ballots, less than 10 percent of the total, remain to be counted, particularly in metro Atlanta’s DeKalb County and Savannah’s Chatham County. Ballots arriving after Election Day don’t count. Several counties in the Atlanta area ran into technical difficulties, but it’s unclear whether this will generate lawsuits or other problem beyond a delay in the count.

Late‐​arriving ballots don’t count here either. Election officials had previously said that full unofficial results could take until the end of the week, but the secretary of state said Tuesday night that she expected to have “a very clear picture, if not a final picture” of the results by Wednesday night.

State officials said they didn’t know how many votes are left to count because ballots were mailed to all active registered voters and can arrive by Nov. 10. The outstanding ballots are largely from Clark County (Las Vegas). If this race tightens, and especially if Trump pulls ahead, expect a recount and litigation of some kind.

As long as ballots were postmarked by Nov. 3, state election officials have until Nov. 12 to count them. Expect close legal scrutiny of those late‐​arriving ballots, as well as perhaps an emergency request from the Trump campaign to stop the count if it can come up with a theory of why these ballots may be less legitimate.

By state law, officials couldn’t start processing mailed ballots until Election Day. Secretary of the Commonwealth Kathy Boockvar has said that she expects “the overwhelming majority” of votes will be counted by Friday. The state supreme court extended the receipt deadline to Nov. 6, and even more controversially allowed the counting of timely ballots without a postmark. The U.S. Supreme Court split 4–4 on whether to stay that ruling — the deciding vote, John Roberts, clearly preferred to kick the can down the road in the hope that it wouldn’t ultimately matter — but these issues could come roaring back should the election indeed turn on Pennsylvania.

The U.S. Supreme Court blocked a court order to count mailed ballots arriving after Election Day because the order came from a lower federal court, not a state court. Gov. Tony Evers had said he expects to know the results Wednesday at the latest, but with many ballots outstanding in Milwaukee County, this could drag on. If Biden’s lead narrows or evaporates, expect at least a recount and possibly litigation over late‐​arriving ballots.

Late‐​arriving ballots don’t count. The Trump campaign pushed back ferociously when Fox News called Arizona relatively soon after polls closed, so everyone else except the AP has shied away from making this call.