About 40,000 U.S. Army National Guard, which is 13% of the entire force, are likely to be forced out of service for refusing the Covid vaccination which is mandated by Team Biden’s Pentagon.

Kansas Republican Sen. Roger Marshall, a physician, said on Twitter that Team Biden “is allowing illegal immigrants of unknown vax status to invade our country every day but is still willing to fire up to 40,000 American heroes.” 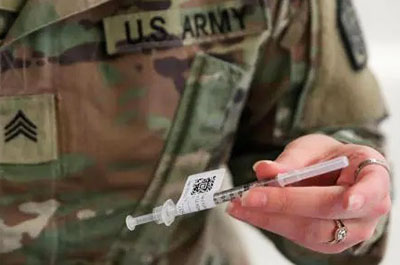 June 30 marked the deadline for service members to be vaccinated, but Tennessee Republican Sen. Marsha Blackburn introduced legislation that would ban federal funds used to require National Guard members to receive the jab. It would also prohibit the Secretary of Defense from taking any adverse actions against Guard members who refuse to comply with the mandate.

“Our servicemembers are the bedrock of America,” Blackburn told The Daily Caller before introducing the legislation. “Firing 40,000 Guardsmen for refusing the Covid vaccine would be both a complete disgrace and a threat to our national security.”

Pentagon officials said after the June 30 deadline that National Guard members wouldn’t receive payment by the federal government when activated on federal status — including monthly drills and their annual two-week training period. Even those assigned to work on the southern border or Covid-related missions in various states either have to get fully vaccinated or lose out on payment and participation.

However, states that don’t require the Covid vaccination could still allow activated duty members to serve in their respective states and receive state payments.

Last year, Defense Secretary Lloyd Austin ordered every service member of the U.S. Military to get vaccinated. The mandate has already had a devastating impact on thousands of Guard members and their families.

Earlier this year, 2,500 Air National Guardsmen became ineligible for pay or benefits after refusing to get the Covid vaccine, the Air Force Times reported.

The number could grow to about 6,100 ousted Guardsmen if another 3,600 or so are denied religious exemptions — which no one has earned so far.

One African American member of the Air Force reserves, a father of four, told WorldTribune.com he had to drop his college classes and take on extra work after being forced out and losing his benefits for refusing the vaccine.

To withhold pay from unvaccinated members, the Air National Guard is canceling or curtailing their orders and listing them as unexcused absences at drill roll calls. Service members won’t get an invoice if they aren’t assigned tasks to be compensated for, the service said.

COVID-19, Tens of thousands of Army National Guard will likely be fired over refusal to get jab, vax mandate, WorldTribune.com

Tens of thousands of Army National Guard will likely be fired over refusal to get jab added by Editor Two on July 3, 2022
View all posts by Editor Two →