Team BLM takes a knee at Olympics, then loses to Sweden

Team BLM, known to some as the U.S. women’s soccer team, took a knee prior to the start of their Tokyo Olympic Games opener on Wednesday. Team BLM was promptly spanked by Sweden, losing by a score of 3-0. 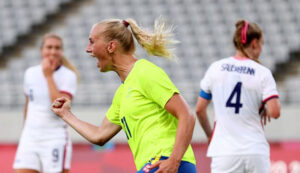 The U.S. squad is ranked No. 1 in the world and are the favorites to win gold in Tokyo. They had a 44-match unbeaten streak heading into Wednesday’s match.

“Did we expect this result tonight? No,” said U.S. forward Megan Rapinoe, who did not start but came on as a substitute in the 64th minute with the score 2-0. “It’s frustrating, and it’s frustrating that it’s Sweden. They found a lot of space on us. I don’t even know how many goals we have given up this whole year. I don’t remember the last time we gave up a goal. So to give up three is not great.”

Rapinoe also defended the squad’s taking a knee and encouraged other athletes to make political statements at the Games.

“It’s an opportunity for us to continue to use our voices and use our platforms to talk about the things that affect all of us intimately in different ways,” Rapinoe said.

Earlier this month, the International Olympic Committee extended guidelines on athletes’ freedom of expression at the Tokyo Games but warned against political gestures during official ceremonies, competitions and in the Olympic Village.