Under a new regulation proposed by Team Biden’s Bureau of Alcohol, Tobacco, Firearms, and Explosives (ATF), most owners of AR-style pistols would be forced to pay a $200 tax per weapon. 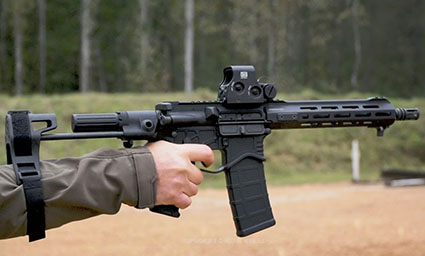 To avoid the tax, the gun owners would be required to radically change the weapon or turn it in to be destroyed.

The 71-page rule signed by Attorney General Merrick Garland would change the classification of the AR-style pistols which are popular at ranges and in some hunting circles.

The rule would move the firearms into the category of “dangerous” weapons which are subject to a rule from the Al Capone era aimed at ending gangland killings with sawed-off shotguns and rifles.

The rule cited just one deadly shooting in which an AR pistol was used.

“And because ATF said it doesn’t expect anyone to give up their guns, the money would roll in if the rule is adopted,” Washington Examiner columnist Paul Bedard noted.

The ATF estimated there are 3 million to 7 million AR-style pistols in the United States. Other agencies and media have put the total at potentially 20 million to 40 million guns and regulated parts.

At issue, Bedard noted, “is a stabilizing brace attached to the butt of the pistol meant to make it easier to shoot with one hand. Many are extendable, and some owners use the pistols as rifles. That, said ATF, turns the shorter barreled pistols into regulated ‘short barrel rifles.’ ”

The ATF rule suggested there are eight major makers of the braces. Industry analysts say the livelihoods of those who make the braces would be put in jeopardy if the rule is adopted.