As Russian troops assemble at Ukraine’s border ahead of a possible land invasion, President Biden has taken swift action by deploying an elite seal team to evacuate his son Hunter’s money. 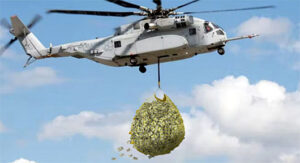 “At my direction, military operatives infiltrated a bank to evacuate my son’s stash of sweet, sweet Burisma cash before Russia murdered everyone. I didn’t want to risk that money falling into the wrong hands,” said Biden in a statement to congress.

“Unfortunately, we haven’t been able to evacuate Americans from the country because I put all our resources on this operation. But make no mistake, we will leave no dollar behind.”

The four-man squad was dropped into ally territory by a Black Hawk helicopter outfitted for stealth missions. Once on the ground, they covertly asked for directions to the nearest bank and shared an Uber to make the 4-mile journey.

Bank security footage depicts the squad calmly entering the bank and asking for the manager. The squad then assembled in a tiny cubicle to discuss closing the account. In the end, the soldiers strategically left the building with a giant cargo net filled with millions of U.S. dollars.

Team Biden evacuates Hunter’s cash from Ukraine in daring, strategic op added by Editor One on January 26, 2022
View all posts by Editor One →