Two Lieutenant Colonels spoke out against their chain of command.

One was widely-promoted as a hero by the corporate media and protected by the intelligence community.

The other was fired within 24 hours. 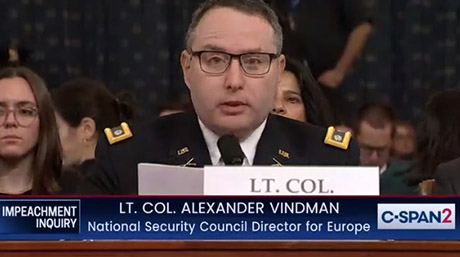 Army Lt. Col Alexander Vindman was a star witness in Democrats’ sham impeachment of President Donald Trump. He was quickly hailed as a hero by the Left even as the officer got negative reviews in alternative media accounts citing prominent veterans.

Top Democrats even pleaded with the Army and the intelligence community to ensure Vindman was “protected both professionally and personally from retaliation” for testifying on the nothingburger Trump-Ukraine phone call.

On Thursday, Scheller posted a four-minute, 45-second video to Facebook in which he appeared in uniform and slammed military leadership following the suicide bombing at Kabul airport which killed 13 U.S. service members and at least 169 Afghans.

The Marine Corps on Friday announced that Scheller was relieved “due to a loss of trust and confidence in his ability to command,” according to Task & Purpose.

“People are upset because their senior leaders let them down, and none of them are raising their hands and accepting accountability or saying, ‘We messed this up,’ ” he said.

“I’m not saying we’ve got to be in Afghanistan forever,” Scheller added, “but I am saying: Did any of you throw your rank on the table and say, ‘Hey, it’s a bad idea to evacuate Bagram Airfield, a strategic airbase, before we evacuate everyone’? Did anyone do that? And when you didn’t think to do that, did anyone raise their hand and say, ‘We completely messed this up?’ ”

Milley said on June 23 that Bagram “wasn’t tactically or operationally necessary” for the U.S. military’s final exit from Afghanistan.

Scheller said he personally knew one of the service members who died in Thursday’s attack: “Potentially all those people did die in vain if we don’t have senior leaders that own up and raise their hand and say, ‘We did not do this well, in the end,’ ” he said. “Without that, we just keep repeating the same mistakes.”

Scheller wrote on Facebook that he had been “relieved for cause based on a lack of trust and confidence.”

“I have been fighting for 17 years,” Scheller concluded. “I am willing to throw it all away to say to my senior leaders: I demand accountability.”

In a Facebook post on Friday night, Scheller said that when he posted the video Thursday, “I immediately had multiple Marines call and ask me to take down the post. ‘We all agree with you Stu, but nothing will change, and it will come at a huge personal cost to you.’ ”

“We can’t ALL be wrong,” Scheller added. “If you all agree … then step up. They only have the power because we allow it. What if we all demanded accountability?”

“I demand accountability, at all levels. If we don’t get it, I’m bringing it,” Scheller told the New York Post.