A recent study reported in the peer-reviewed Organization Studies found that just 36 percent of earth scientists and engineers believe that humans are creating a climate change crisis.

A majority of the 1,077 respondents in the survey believe that nature is the primary cause of recent global warming and/or that future global warming will not be a very serious problem. 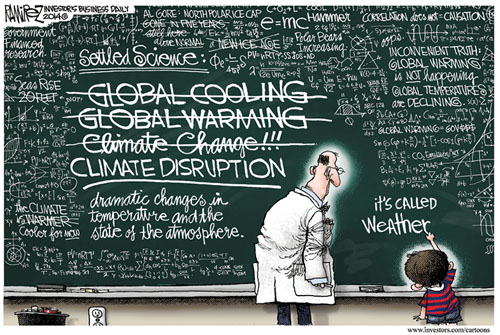 The survey’s authors noted that only 36 percent of respondents fit the “Comply with Kyoto” model in which scientists “express the strong belief that climate change is happening, that it is not a normal cycle of nature, and humans are the main or central cause.”

The overwhelming majority of scientists in the survey “fall within four other models, each of which is skeptical of alarmist global warming claims,” Taylor noted.

The survey’s authors said that 24 percent of respondents fit the “Nature Is Overwhelming” model. “In their diagnostic framing, they believe that changes to the climate are natural, normal cycles of the Earth.” Moreover, “they strongly disagree that climate change poses any significant public risk and see no impact on their personal lives.”

Another group of scientists fit the “Fatalists” model. These scientists, comprising 17 percent of the respondents, “diagnose climate change as both human- and naturally caused. ‘Fatalists’ consider climate change to be a smaller public risk with little impact on their personal life. They are skeptical that the scientific debate is settled regarding the IPCC (Intergovernmental Panel on Climate Change) modeling.” These scientists are likely to ask, “How can anyone take action if research is biased?”

The survey authors noted that 10 percent of respondents fit the “Economic Responsibility” model. These scientists “diagnose climate change as being natural or human caused. More than any other group, they underscore that the ‘real’ cause of climate change is unknown as nature is forever changing and uncontrollable. Similar to the ‘nature is overwhelming’ adherents, they disagree that climate change poses any significant public risk and see no impact on their personal life. They are also less likely to believe that the scientific debate is settled and that the IPCC modeling is accurate. In their prognostic framing, they point to the harm the Kyoto Protocol and all regulation will do to the economy.”

The final group of scientists, comprising 5 percent of the respondents, fit the “Regulation Activists” model. These scientists “diagnose climate change as being both human- and naturally caused, posing a moderate public risk, with only slight impact on their personal life.” Moreover, “They are also skeptical with regard to the scientific debate being settled and are the most indecisive whether IPCC modeling is accurate.”

Taylor noted that “Taken together, these four skeptical groups numerically blow away the 36 percent of scientists who believe global warming is human caused and a serious concern.”

One interesting aspect of the new survey, Taylor added, “is the unmistakably alarmist bent of the survey takers. They frequently use terms such as ‘denier’ to describe scientists who are skeptical of an asserted global warming crisis, and they refer to skeptical scientists as ‘speaking against climate science’ rather than ‘speaking against asserted climate projections.’ Accordingly, alarmists will have a hard time arguing the survey is biased or somehow connected to the ‘vast right-wing climate denial machine.’ ”

Taylor concluded: “People who look behind the self-serving statements by global warming alarmists about an alleged ‘consensus’ have always known that no such alarmist consensus exists among scientists. Now that we have access to hard surveys of scientists themselves, it is becoming clear that not only do many scientists dispute the asserted global warming crisis, but these skeptical scientists may indeed form a scientific consensus.”