The shocker would be if there were no cheating or irregularities in a California election. 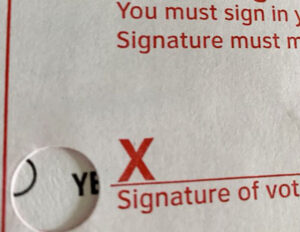 Ballots for the California recall election have been mailed to voters, and already problems have been reported.

One conservative voter noted in a social media post that the envelope on the ballot she received had a hole punched in it which makes the “vote visible.”

Another voter posted a photo of the ballot received in the mail with a hole punched in the envelope which reveals the vote.

. @GavinNewsom needs to be asked if his team did this on purpose. This is cheating. pic.twitter.com/21Ws8MkeT2

2 women caught on camera stealing CA Gov. Recall Election ballots out of apartment mailboxes using a USPS master key to open the entire mail box at once. This was in Valley Village earlier this week. Another man was caught with hundreds of ballots in Torrance as well. pic.twitter.com/5TU1xc2KzP