The Sudanese regime has disputed a report that it used chemical weapons in the Darfur region.

A report by Amnesty International on Sept. 27 said that people in 32 villages in the Jebel Marra area of Darfur reported symptoms consistent with exposure to “blister agents” — a banned class of chemical weapons 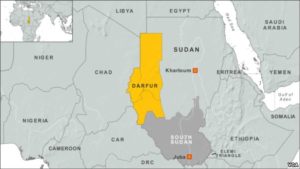 Sudan’s U.N. ambassador said the Amnesty report was “utterly unfounded” and that Sudan does not possess any type of chemical weapons.

As many as 250 people, including children, may have died as a result of chemical attacks, and hundreds more have been injured, according to the rights group.

Sudanese Minister of Justice Awad Hassan Elnour said officials were “very astonished” to hear the report, which he said the Khartoum government refutes.

Elnour said many of the people cited in Amnesty’s report came from central Darfur villages such as Golo, Rokro and Nertiti, who said they had left their villages to avoid the military violence and none had reported symptoms like those described by Amnesty.

U.S. State Department spokesman John Kirby said the U.S. “unequivocally” condemns the use of chemical weapons any time. “Sudan is a state party to the Chemical Weapons Convention,” he said, “and the use of chemicals as weapons by the government would violate its obligations under that convention.”

Fighting has never entirely stopped in Darfur since 2003, when rebels launched a rebellion, citing discrimination and marginalization.