As leftists solidified their grip on the levers of power in California, they virtually eliminated the controlled burns which cut down on the stockpiles of fuel in forests. The inevitable result was more and more wildfires. 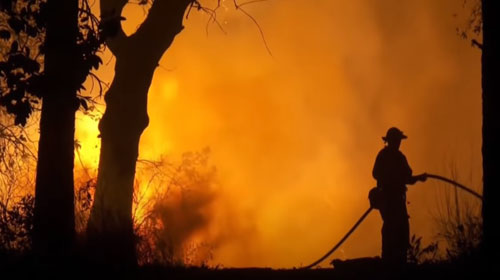 The 2020 fires, which critics say could have been mostly prevented with competent leadership, also essentially nullified nearly two decades’ worth of greenhouse gas emission reductions, according to a new study published in the journal of Environmental Pollution.

The 2020 wildfire season resulted in more than 4 million acres being burned.

“Wildfire emissions in 2020 essentially negate 18 years of reductions in GHG emissions from other sectors,” the study’s authors concluded.

The study highlights that, between 2003 and 2019, California’s greenhouse gas emissions were reduced by 13%, “largely driven by reductions from the electric power generation sector.” But the 2020 fire season alone is “two times higher than California’s total GHG emissions reductions,” researchers found.

The study concluded that while wildfire emissions are not routinely reported alongside other emissions sources, “it is still important to track these emissions to ensure near and medium-term emission reduction targets are met.” Researchers also noted that forest management practices that focus heavily on fire suppression than prevention “also likely increases the risk of large, destructive wildfires.”

Researchers also discovered that wildfire greenhouse gas emissions are the second “most important source in the state” after transportation.

Between 2000 and 2019, the California Air Resources Board (CARB) reported that 41% of the state’s greenhouse gas emissions inventory was from transportation. A spokesperson for CARB told the Los Angeles Times that the agency does not consider wildfire emissions in assessing progress toward greenhouse gas targets because “the targets are specific to human-caused emissions.”

During the most recent legislative session, Gov. Gavin Newsom signed a law requiring California to reach “net zero greenhouse gas emissions” no later than 2045. CARB also announced earlier this year that the state will ban the sale of most gas-powered vehicles by 2035.