Stand your ground: Florida woman who shot, killed intruder who kicked in door won’t be charged

A Florida woman who shot and killed a man who had kicked in the door and entered her home will not be charged. 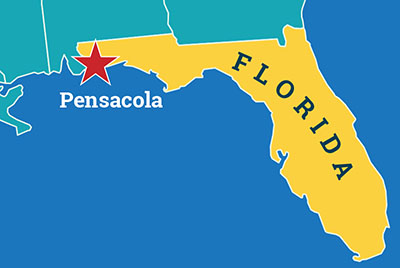 Authorities determined the incident in Escambia County was a “stand your ground” case.

The Pensacola News Journal reported that, shortly after 5 p.m. on Tuesday, Escambia County Sheriff’s Office deputies responded to a call and discovered that a 54-year-old man had been fatally shot by a woman who lived at the residence.

The sheriff’s office posted footage from a security camera showing a man standing on the home’s front porch and yelling profanities as he tries to kick down the front door. After six kicks, the door broke open, at which point the man entered the house and yelled “Let’s f—ing play!” before the video ends.

Escambia County Sheriff Chip Simmons said his agency investigated the shooting and determined the woman acted in self-defense to protect herself and those inside the house — including children — from violence.

“I think what the unique part of this incident is, is the violent intent,” Simmons told the News Journal. “The suspect had an active domestic violence injunction on him, and so, he wasn’t supposed to be there, and he was also reportedly on his way to anger management treatment.”

After the man entered the house, according to Simmons, he armed himself with a knife and began yelling that he was going to harm the mother of the children at the house. Witnesses told authorities the man went room to room searching for the occupants who had retreated to a rear bedroom.

“Once he entered that bedroom, he was confronted by a female who — fearing for her life — shot the man twice,” Simmons said.

Under Florida’s “stand your ground” law, a person who is not engaged in an unlawful activity and who is attacked in any other place where he or she has a right to be has no duty to retreat and has the right to stand his or her ground and meet force with force, including deadly force if he or she reasonably believes their life is threatened or they are at risk of bodily harm.