A Florida resident who fatally shot a thief who stole his boss’s SUV will not face charges, prosecutors announced in a closeout memo on Tuesday. 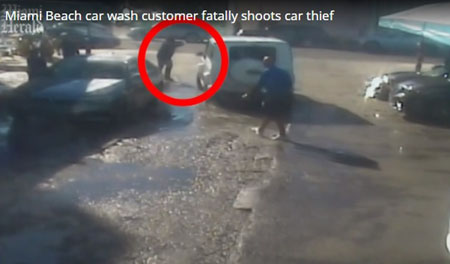 In clearing Lott of wrongdoing, prosecutors said he “had the legal right to stand his ground and use deadly force to protect himself from death or great bodily harm while Reyes Bermudez was committing and escaping from committing a forcible felony.”

Prosecutors said Lott had driven the Mercedes-Benz G-class SUV belonging to his boss to the car wash when he saw Reyes Bermudez get into the driver’s seat of the vehicle and try to drive away.

Lott, who said he feared for his life as the SUV sped toward him, fired two shots at the driver-side door, shooting Reyes Bermudez once in the head, the closeout memo stated.

According to the closeout memo, the suspect had attempted to steal another Mercedes from the car wash business earlier in the morning, but the owner was waiting outside and immediately claimed his vehicle.

Reyes Bermudez, of Orlando, had previously been convicted of theft, robbery and aggravated assault, and had served six prison terms between 1987 and 2013.