Spooked: Exit poll finds GOP voters in Georgia were not over Nov. 3 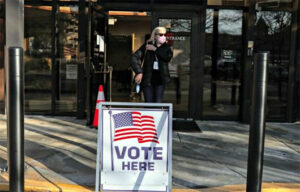 The vast majority of Republican voters in Georgia say the 2020 presidential election between President Trump and Democrat Joe Biden was not conducted fairly, an exit poll for the state’s Senate runoff election reveals.

An exit poll by CNN and Edison Research for the National Election Pool in Georgia’s Senate runoff election — where Sens. Kelly Loeffler (R-GA) and David Perdue (R-GA) are facing challenges from Democrats Raphael Warnock and Jon Ossoff — found that about 75 percent of Republican voters who voted in the runoff election said the November 3, 2020 presidential election was not conducted fairly in the state of Georgia.

“Among Georgia Republicans who voted in the runoff elections, about three-quarters say that the presidential election in Georgia was not conducted fairly, while more than 9 in 10 Democrats say the election, which President-elect Joe Biden won by less than 12,000 votes, was fair,” CNN reports.

Spooked: Exit poll finds GOP voters in Georgia were not over Nov. 3