South Korean group issues powerful indictment of CCP, ‘the enemy of all mankind’

A South Korean group dedicated to shutting down the Confucius Institutes which China uses to spread its communist doctrine worldwide has issued one of the strongest condemnations on record of the Chinese Communist Party (CCP).

The CCP’s domination of “other countries’ education, culture, media and ultimately spirit” via the Confucius Institutes is “only the tip of the iceberg,” Citizens for Unveiling Confucius Institutes (CUCI) said in a statement first issued on July 1. The CCP, the group states, is “the enemy of all mankind.” 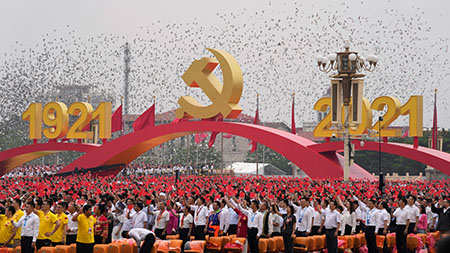 The CUCI’s statement in full:

The Chinese Communist Party (CCP) is struggling to take its last breath on the 100th anniversary of its establishment. Rather than celebrating with the Chinese people, the CCP is creating an atmosphere of fear and locking up its citizens in their own homes. Why fear the people? It is because the CCP can no longer hide the true nature of their one-party dictatorship, which has survived on dishonesty, corruption, hypocrisy and deceit, surveillance, and oppression against the Chinese people. The Party cannot stay in power any more by continuing to cover up the eyes and ears of the citizens. To protect itself, the CCP has now resorted to open threats and outright violence through brute strength.

In the U.S. House of Representatives, a bipartisan resolution was recently introduced, condemning the CCP’s 100 years of abuse against the Chinese people. The resolution provided a well-written summary of this terrible history, ranging between the so-called land reform, Great Leap Forward, Cultural Revolution, and the Tiananmen Square Massacre. Tens of millions of Chinese citizens were brutally murdered through these events. Hundreds of millions were mercilessly arrested, detained and tortured.

As criticized by the U.N. Human Rights Council, the CCP has also been on a campaign to erase the Uyghurs of Xinjiang. More than a million Uyghurs have been locked away in concentration camps to do forced labor. The CCP has subjected the Uyghur women and even children to unspeakable levels of savagery, including organ harvesting. Against Hong Kong, the CCP has ignored its promise of “One Country, Two Systems,” instead brutally oppressing freedom and human rights in the name of its national security law. Against Taiwan, the CCP routinely conducts military provocations and threats of war. The Chinese people now dream of escaping China, because they are being suffocated by surveillance and control; unimaginable levels of corruption and social polarization; and harsh oppression against Christianity, Buddhism, Islam, and Falun Gong.

The CCP is by nature a corrupt dictatorship. Therefore, its foreign policy has necessarily been predatory and invasive. On one hand, the CCP has spied, stolen and bullied the world. On the other hand, it is on a campaign to dominate other countries’ education, culture, media and ultimately spirit. Confucius Institutes are only the tip of the iceberg.

The CCP’s ambition to take over the world has manifested in the creation and spread of the CCP Virus (COVID-19). The disease has already taken over 3.9 million lives and has caused suffering, unemployment, and poverty of untold numbers of people. The CCP has constantly lied about the true origin of the virus, while accelerating the spread of the virus. Increasingly, scientific evidence is proving the suspicion that the CCP developed the virus as a biological weapon.

The CCP is the arch-enemy of the Chinese people, the greatest danger facing mankind, and the worst threat to liberal democracy, human rights, and world peace. The CCP’s ideology of “Socialism with Chinese characteristics” is not socialism. The socialist experiment ended in a dismal failure after being exposed as a preposterous fraud through the Great Leap Forward and Cultural Revolution. The CCP is running a party-centered system of cronyism, bribery and coercion. It is an organized criminal group that extorts and oppresses its citizens.

The Korean War, fought 70 years ago, was a fight against the CCP from the beginning to the end. At the beginning of the war in 1950, half of the North Korean military at the time was the CCP’s Eighth Route Army, made up of Korean-Chinese soldiers. On 19 October 1950, China intervened in the war with a force of 260,000 soldiers. Until the armistice agreement was signed, we had to fight over 600,000 Chinese soldiers.

We, the people of the Republic of Korea (ROK), are facing the fact that our nation’s main adversary is the CCP. North Korea and the Jusapa (pro-North Korean factions virtually dominating South Korea) within the ROK are both supported by the CCP. Most importantly, the CCP has penetrated various areas of our nation, including politics, economy, culture, media and education, in a manner similar to the human wave attack during the Korean War. The CCP has extended its evil tentacles into all levels of our government and political parties on both sides of the aisle. It is also on a path to legally occupying our country through the construction of large Chinese enclaves, which they call Chinatowns.

However, the CCP’s death knell is ringing loudly. All of humanity has now seen the evil deeds of the CCP for what they are. To end the rise of the CCP, the world is forming an alliance centered around the United States. Economically, a new international division of labor has been agreed upon, excluding the CCP. Politically and militarily, a multilateral security cooperation group has been formed through the Quad+ and D10 (Democratic Ten) in order to block the CCP’s military provocations. The CCP and the liberal democracies of the world, with the US in the center, are on a collision path. The coming conflict will be the death of the CCP.

The CCP and the free world cannot co-exist, and our nation cannot go about saying “the US for national security, China for economy” any more. That age has come to an end. The free world’s consensus is that the CCP and its rampant behaviors can no longer be tolerated. Therefore, we the free citizens of the Republic of Korea solemnly declare that we will ally with the world’s free citizens and fight against the CCP. Together, we will bring down the CCP – the enemy of all mankind.

(The statement was initially published in Korean in the Media Watch.)