The major media is doing a “great disservice to the public” by “instilling this fear” in their reporting on the coronavirus, South Dakota Republican Gov. Kristi Noem said. 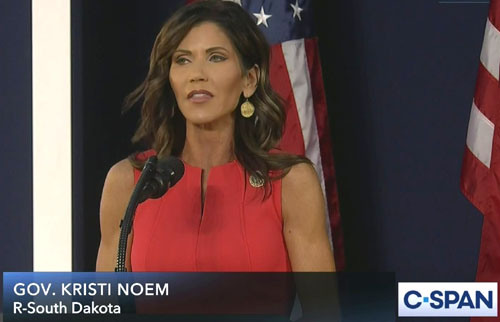 Chumley noted: “It’s one thing for Americans to take simple, sane, sensible solutions to protect themselves from getting sick. It’s another thing entirely to shut down an entire nation, an entire economy, entire school and church and business communities, all for — fear? Fear mixed with politics.”

“There is definitely a political element to what’s happening in the country, even in South Dakota, even with our media,” Noem said during an interview with Chumley at her governor’s offices. “You can send them 10 factual data points of where we are in dealing with the virus … and their headline will be the worst one that misconstrues the reality of what we see on the ground today.”

The governor said on Monday that South Dakota is an example of how a state can navigate the coronavirus pandemic without draconian lockdown orders.

Noem noted: “Earlier this week, one very prominent national reporter sent me a note that said: ‘Governor, if you hadn’t stood against lockdowns, we’d have no proof of just how useless they really have been.’ ”

Meanwhile, Noem said the violence that has engulfed much of the nation is a result of “poor leadership” and pointed out the violence is occurring in mostly Democrat-run cities.

“The violence you’re seeing in some of our cities is astounding to me and overwhelmingly these are Democrat-led communities,” Noem said. “There is no consequence for breaking the law there today and that’s not what America is about.”

“For us,” Noem said, “doing things that are founded by our values, abiding by the oaths that I took to the state Constitution and the U.S. Constitution and recognizing what authorities I do have as governor but also recognizing what I don’t have — and not overstepping that in a time of crisis I think is incredibly important and people will see in the long run we are best served by freedom we are best served by leaders that know their place, know what their role is, and don’t overstep their authority.”