As new headlines in the Brett Kavanaugh drama boil up by the hour, the impression that accusations against Supreme Court nominee Judge Brett Kavanaugh are spontaneous is undercut by reports that billionaire George Soros subsidized key lawyers and activists.

Arguably such funding made possible what amounts to last week’s ultimate episodes in Reality TV programming. Among the recent developments: 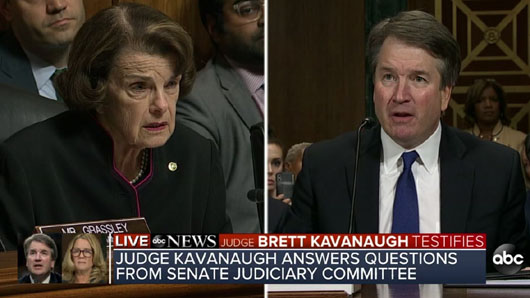 Judiciary Committee Chairman Chuck Grassley has referred potential false statements made by a man claiming Kavanaugh raped a woman on a boat in Rhode Island in 1985 for criminal investigation.

The accuser, in a letter to Sen. Sheldon Whitehouse, Rhode Island Democrat, had claimed that a female friend was assaulted on the boat by “two heavily inebriated men she referred to at the time as Brett and Mark.”

The man said he and another individual chased down “Brett and Mark” at the harbor and “physically confronted the two men, leaving them with significant injuries.”

Shortly after NBC ran the story, the man recanted, saying it was a hoax.

In a letter to Attorney General Jeff Sessions and FBI Director Chris Wray, Grassley sought a criminal review of the actions by the man who provided Congress with the information.

“The Committee is grateful to citizens who come forward with relevant information in good faith, even if they are not one hundred percent sure about what they know. But when individuals provide fabricated allegations to the Committee, diverting Committee resources during time-sensitive investigations, it materially impedes our work. Such acts are not only unfair; they are potentially illegal. It is illegal to make materially false, fictitious, or fraudulent statements to Congressional investigators. It is illegal to obstruct Committee investigations,” Grassley said in the letter.

It was Swetnick who, through her attorney, Michael Avenatti, alleged that Kavanaugh was “present” at gang rapes at high school parties in the early 1980s. She provided no corroborating evidence.

Reports emerged that Swetnick had been accused of making false accusations of sexual misconduct in the past.

The Oregonian reported that Swetnick “faced allegations of her own misconduct during a short stint at a Portland tech company 18 years ago.”

The suit, which was dismissed, alleged that Swetnick “engaged in unwelcome, sexually offensive conduct” while at Webtrends and “made false and retaliatory allegations that other co-workers had engaged in inappropriate conduct toward her.”

Webtrends also alleged that Swetnick claimed to have graduated from Johns Hopkins University but the company said it subsequently learned the school had no record of her attendance. Webtrends said she also “falsely described her work experience” at a prior employer.

“Roughly a decade ago,” WSJ reported, “Swetnick was involved in a dispute with her former employer, New York Life Insurance Co., over a sexual-harassment complaint she filed, according to people familiar with the matter.” The company settled with Swetnick.

A central presence in the showdown over Kavanaugh, Katz is the vice-chairman of POGO, the Project on Government Oversight, a leftist group funded by George Soros.

Katz has also donated thousands of dollars to Democratic candidates, including Hillary Clinton and Barack Obama.

Keyser, one of Blasey Ford’s best friends at Holton-Arms, the all-girl private school in Bethesda not far from Kavanaugh’s boy-only Georgetown Preparatory, has repeated her denial that she was present at the party where Blasey Ford said she was sexually assaulted by Kavanaugh.

Keyser’s attorney, Howard J. Walsh III, previously said in an email to the Senate Judiciary Committee that “Simply put, Ms. Keyser does not know Mr. Kavanaugh and she has no recollection of ever being at a party or gathering where he was present, with, or without, Dr. Ford.”

“Ms. Keyser asked that I communicate to the Committee her willingness to cooperate fully with the FBI’s supplemental investigation of Dr. Christine Ford’s allegations against Judge Brett Kavanaugh. However, as my client has already made clear, she does not know Judge Kavanaugh and has no recollection of ever being at a party or gathering where he was present, with, or without, Dr. Ford.”

In an op-ed for National Review, Michael Schwartz said the Senate should censure Feinstein: “Her deception and maneuvering, condemned across the political spectrum, seriously interfered with the Senate’s performance of its constitutional duty to review judicial nominations, and unquestionably has brought the Senate into ‘dishonor and disrepute,’ the standard that governs these matters. As a matter of institutional integrity, the Senate cannot let this wrong go unaddressed.”

Under Article I, Section 5 of the Constitution, each House of the Congress may “punish its Members for disorderly Behavior.”

“Nine times in American history the Senate has used that power to censure one of its members. Feinstein has richly earned the right to join this inglorious company.” Schwartz wrote.

The last three senators censured, Thomas Dodd, Herman Talmadge, and Dave Durenberger, “were all condemned for financial hanky-panky: converting campaign contributions to personal use and the like. They were all found to have brought the Senate into ‘dishonor and disrepute’ even though nothing they had done implicated the Senate’s performance of its constitutional duties,” Schwartz noted. “Feinstein, in sharpest contrast, sought to keep her committee from timely and properly investigating an apparently serious charge of misconduct, and is still doing so, even in the face of criticism from all (or most) quarters.”

And, Schwartz added, how does Feinstein stack up against the most famously censured senator, Joe McCarthy?

“While what people remember is McCarthy’s trafficking in smears and innuendoes – immortalized in Joseph Welch’s ‘have you no sense of decency’ reproach – McCarthy was actually condemned for ‘non-cooperation with and abuse of’ one Senate subcommittee and abuse of another. The words of McCarthy’s condemnation – that his conduct ‘tended . . . to obstruct the constitutional processes of the Senate, and to impair its dignity’ – fit Feinstein’s conduct as the ranking member of the Judiciary Committee like a glove.”