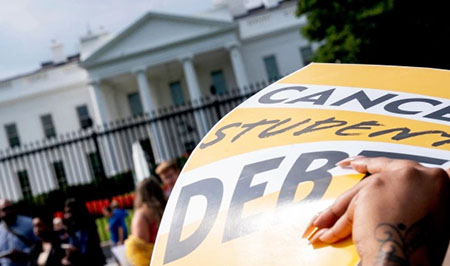 Arkansas, Iowa, Kansas, Missouri, Nebraska and South Carolina said in the lawsuit filed in U.S. District Court in Missouri that Congress did not authorize the debt cancellation, meaning Team Biden lacked the legal authority to take the action.

The states also argue in the lawsuit that the U.S. “economy is not well” and the cancellation of student debt, estimated to cost at least $400 billion, will add to inflationary pressures, further harming to the country’s already-strapped middle- and working-classes and poor Americans.

“The burden of the economic loss and price increases will hit those who can least afford it – the working class and the poor,” the lawsuit says, adding that those who benefit from Team Biden’s plan are in the top 60% of income earners.

Arkansas Attorney General Leslie Rutledge noted: “It’s patently unfair to saddle hard-working Americans with the loan debt of those who chose to go to college,” she said. “The Department of Education is required, under the law, to collect the balance due on loans. And President Biden does not have the authority to override that.”

There is no statute that permits Team Biden “to unilaterally relieve millions of individuals from their obligation to pay loans they voluntarily assumed,” the states argued. “Just months ago, the Supreme Court warned federal agencies against ‘asserting highly consequential power beyond what Congress could reasonably be understood to have granted’ by statute.”