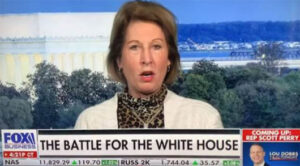 The very night of the election many people saw something that they had never seen before in the history of our elections. They saw votes being changed on the screen in front of them, going from President Donald Trump to Joe Biden. On top of that, the morning after the election, even that night, the voting stopped. They stopped counting in multiple districts at the same time before the vote got to 270 electors for President Trump. That’s never happened before.

The only time votes have ever stopped being counted in this country on election night was when the Broward County problem developed over Hanging Chad’s in one county in FL. So for FIVE states to stop counting on election night is absolutely unprecedented. And they did it because the vote count for the electoral college was about to hit [+ go over] 270 for President Donald Trump, because of the massive outpouring of votes for him that night.

By the next morning, multiple mathematicians had contacted me and told me they knew the algorithm that had been run to change the votes. It was that obvious to people with mathematical expertise. It is a mathematical impossibility for 100’s of thousands of votes to show up for VP Biden alone and to have been injected into the system the way that they were.