Sen. Graham: GOP must fight or there will ‘never be another Republican president’

Despite what the Joe Biden media wing says, the 2020 presidential election is not a done deal, Sen. Lindsey Graham said. 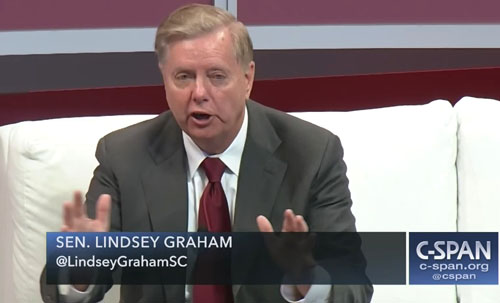 The South Carolina Republican encouraged President Donald Trump to fight on in court and warned Republicans that if they do not stand up now it will set a disastrous precedent for the Grand Old Party.

“If Republicans don’t challenge and change the U.S. election system, there’ll never be another Republican president elected again,” Graham said in an interview on the Fox News program Sunday Morning Futures. “President Trump should not concede, we’re down to 10,000 votes in Georgia, he’s going to win North Carolina, we’ve gone from 93,000 votes to 20,000 votes in Arizona, where there are more votes to be counted. There are allegations of system failure, fraud.”

Graham said that Trump’s team canvassed early voters in Pennsylvania and found more than 100 people they believe were dead, with at least 15 Graham said who were confirmed dead. He also said Trump’s camp found six instances in Pennsylvania where people were registered to vote after they died, and then votes were cast in their names.

The FBI, the Postal Inspector, and the Senate Judiciary Committee will be looking into a postal worker in Erie, Pennsylvania who claims that supervisors were backdating ballots that were being sent out so they would appear to have been sent on Election Day instead of after, Graham said.

“So to my Republican colleagues out there: We have to fight back or we will accept our fate. I want Pennsylvania to explain to the American people how six people after they die can register to vote in Pennsylvania. I want the computer system in Michigan that flipped votes from Republicans to Democrats to be looked at.”

The concerns prior to the election of Trump and other Republicans who warned that large-scale mail-in voting would expose the election to risks of massive fraud were well-founded, Graham said.

“The post office is the new election center. It’s the wild, wild west when it comes to mail-in balloting, everything we worried about has come true,” he said. “So if we don’t fight back in 2020 we’re never going to win again presidentially. A lot’s at stake here.”

#Glitchgate, 2020 election, Sen. Graham: GOP must fight or there will ‘never be another Republican president’, voter fraud, WorldTribune.com