Cannon Hinnant was supposed to start kindergarten next week.

On Sunday, the 5-year-old was shot in the head at point-blank range in front of his 7- and 8-year-old sisters in the driveway of their North Carolina home.

The murdered boy was the subject of a #SayHisName trend on social media on Thursday.

The leftist major media has yet to report on the tragedy. CNN, NBC, CBS, ABC, and MSNBC, as of Thursday morning, had yet to cover the attack. Fox News did.

“Say his name. 5 year old Cannon Hinnant was executed in cold blood while riding his bike,” posted Walsh. “The accused killer is Darius Sessoms. He allegedly walked up to the boy and shot him dead in front of his sisters.”

“Reverse the races and this is the only thing anyone talks about for a month,” Walsh said.

“Have any mainstream media outlets covered Cannon Hinnant yet?” asked Informed Dissent host Leonydus Johnson. “The deception in selective reporting is their most potent weapon because it drives availability bias which, in turn, distorts reality. It is the same as lying. Just imagine if the races were reversed. #SayHisName.”

“You should know who Cannon Hinnant is and it’s an absolute disgrace that you don’t,” said radio host Jesse Kelly. “The American media is putrid.”

Sessoms was apprehended Monday by U.S. Marshals Service Carolinas Regional Fugitive Task Force, Goldsboro Police, and the Wayne County Sheriff’s Office, according to a report from WRAL.com. He has been charged with first-degree murder and is being held without bond at the Wilson County jail.

Sessoms reportedly had dinner with the victim’s family on Friday night, according to WRAL.com, and was at the family’s house the afternoon preceding the murder.

“Our neighbor saw it,” one neighbor recalled, according to ABC 11 Eyewitness News. “She said he (Sessoms) just — the young man just walked up to the little boy who was just sitting on his bike. I just don’t understand why he did it. How can you walk up to a little boy point-blank and put a gun to his head, and just shoot him? How can anyone do that?”

The Daily Wire’s Walsh noted: “The name Cannon Hinnant would be known across the country, and the name Darius Sessoms reviled the world over, if the races were reversed. A story of a white man running up to a black child and executing him while he rode his bike would be front page news for weeks. And there would almost certainly be rioting, spurned on in part by the incessant coverage.”

Walsh added a visual (below) he said is instructive of the major media’s non-treatment of the story. 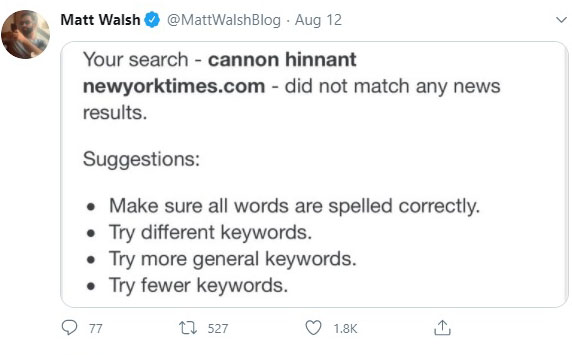