A London rally in support of U.S. President Donald Trump was banned by police in the UK capital headed by Mayor Sadiq Khan. 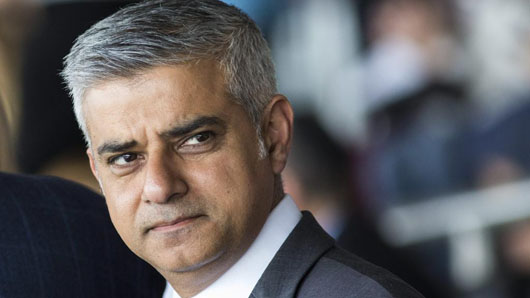 Supporters attending the “Welcome Trump” event on July 14 “had planned to gather outside the embassy and march from there to Whitehall, where they would have joined in with a separate ‘Free Tommy Robinson’ event in support of the activist and independent journalist who was recently imprisoned for contempt of court after reporting on a grooming gang trial,” according to the report.

“But the Metropolitan Police Force, which answers to a large extent” to Khan, “used the Public Order Act to impose a raft of restrictions on both groups,” the Breitbart report said.

Protesters at the far larger anti-Trump demonstrations, which Khan encouraged, were allowed to carrying signs with profanity and messages such as “Die Trump Die,” the report said.

David Kurten, an elected member of the London Assembly for the Brexit-supporting UK Independence Party, told Breitbart he “was planning to go to the American embassy to meet with a group of demonstrators who are planning to welcome Trump into the country… it’s really good to see him in this country, and speaking truth to the people in power in this country.

“But as I came out of the police station I was handed this piece of paper by a couple of friendly police officers, who were just doing their job, but they’ve imposed Section 12 Public Order Act conditions on the assembly outside the American embassy, which means that people are not allowed to proceed or have a march or any kind of demonstration,” he claimed.

“And we’ve also been told that if I go to the American embassy in a group of three or more people that I’m liable to be arrested myself — so free speech is dead,” he concluded.

“What this is, is Sadiq Khan not wanting people to express pro-Trump values,” added Young Independence Deputy Chairman Reece Coombes.

“But as soon as probably only a few thousand of us want to protest in favor of Trump and show our support for the leader of the free world, we are banned, we are silenced, and we are censored.”

Meawhile, the Trump administration intervened on behalf of Robinson, according to a Reuters report.

Sam Brownback, Trump’s Ambassador-at-Large for International Religious Freedom, reportedly asked Britain’s Sir Kim Darroch to treat Robinson fairly or the U.S. administration may feel compelled to publicly criticize Britain’s handling of his case, according to two sources in contact with the organizers of the “Free Tommy” demonstration held on July 14.

Reuters claimed a British official confirmed the intervention, telling them that Brownback had raised the issue of Robinson’s imprisonment.

A source close to the story told Breitbart London that “Free Tommy advocates in Washington D.C. have been in contact not just with the U.S. State Department, but with members of Congress on Capitol Hill and more,” claiming that Brownback “heard about Tommy case and was immediately disturbed by the implications for free speech.”

U.S. Rep. Paul Gosar, Arizona Republican, tweeted that he was “concerned about the arrest & conviction of Tommy Robinson in Great Britain,” and that the “British Gov’t seems more interested in covering up rape than seeking truth.”

Gosar later told Breitbart London: “I certainly hope the United States intervenes and speaks up over the persecution of Tommy Robinson. I think the injustice of not being able to bring light to the situation dissolves all equitable application of the rule of law.”