Saying they are committed to a “lasting cease-fire” in Syria, the presidents of Iran, Russia and Turkey said after an April 4 summit in Ankara that an end to the conflict can only be achieved “through a negotiated political process.” 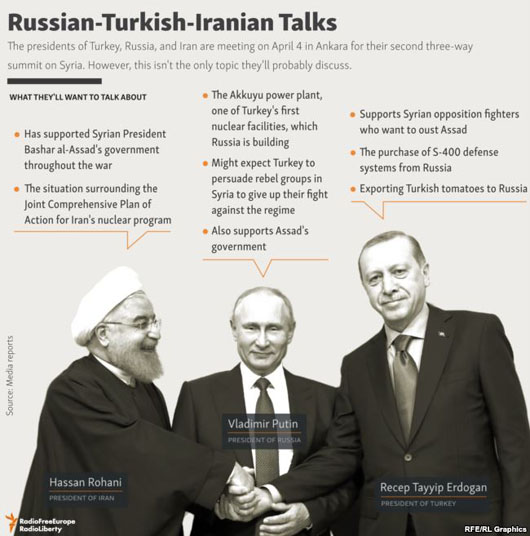 The  administration of President Donald Trump is reportedly considering a withdrawal of U.S. special forces from Syria.

Turkish President Recep Tayyip Erdogan, Vladimir Putin of Russia, and President Hassan Rohani of Iran agreed to “speed up their efforts to ensure calm on the ground,” according to a joint statement posted on Rouhani’s website on April 4.

Putin told reporters the three leaders had agreed on a “firm commitment to the consolidation of sovereignty, independence, and territorial integrity of the Syrian Arab Republic.”

Putin also endorsed a proposal by Erdogan for the three countries to jointly provide humanitarian aid to Syria and called on other nations to join the effort.

Prior to the summit, Rouhani had insisted that foreign forces operating in Syria without approval from the Bashar Assad government in Damascus should leave.

Iranian state TV quoted Rouhani as saying that he would discuss with Erdogan and Putin Syria’s reconstruction and work on a new constitution.

After the April 4 summit, Erdogan said: “What is foremost for us is getting results. We must get results. We have no tolerance for delays. People are dying here.”

Turkish forces late last month seized the Syrian town of Afrin and is setting its sights on additional Kurdish-controlled territory, Geostrategy-Direct.com reported in its April 3 edition.

Meanwhile, Putin has said that he and Erdogan have agreed to speed up the delivery of Russia’s S-400 air-defense missile systems to Ankara, a purchase that has raised concern among Turkey’s NATO partners, Radio Free Europe/Radio Liberty (RFE/RL) reported on April 3.

“We took the decision to speed up the timetable for the delivery of these highly effective Russian systems,” Putin told reporters after talks with Erdogan in the Turkish capital.

He didn’t give a date. Previously, delivery was expected to begin at the end of 2019 or beginning of 2020, the report said.

The United States has warned countries around the world, including Turkey, that they could face sanctions over any “significant transactions” they make with Russia’s military.