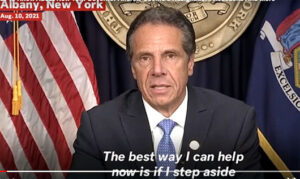 In a no-holds-barred column posted Aug. 10 at Newsweek, Sirota bluntly called out the rotten core of Democratic machine politics in The Empire State while proclaiming that the problem is bipartisan and endemic in our ruling political class. Andrew Cuomo is not an anomaly, Sirota asserts. He is the norm among elected officials in this nation in 2021.

Cuomo resigned in the wake of Attorney General Letitia James’ report detailing his sexual misconduct. And there’s the ugly truth: If the New York governor had not been a sex pest, he likely would have gotten away with hiding thousands of people’s deaths in nursing homes and shielding his health care industry donors from any liability — all while profiting off a $5 million book deal and being venerated by liberals and corporate media outlets as a shining star.

Cuomo’s departure more than likely ensures that he will never be called to account over the deadly nursing home scandal, Sirota believes:

In fact, unless things suddenly change, Cuomo will still get away with those crimes. With U.S. Attorneys so far declining to prosecute Cuomo on those matters and with New York’s legislature refusing to begin impeachment proceedings on those issues, the federal and state political systems made sure these crimes weren’t considered transgressions at all.

In a blistering paragraph, the former Sanders staffer points an accusatory finger directly at the Biden administration, accusing it of aiding and abetting the vast cover-up operation:

Indeed, presiding over a massacre of elderly people and shielding the perpetrators all to ingratiate oneself with political financiers is just regular politics these days. That’s now what politicians are allowed — even expected — to do. While President Biden’s former top aide lobbies the White House on behalf of the nursing home industry, the Biden Justice Department recently said it would not open an investigation into nursing home negligence and COVID-related deaths in New York and other states. Case closed.

Biden duly played his part in the “Fall of Cuomo” theater on Aug. 10, expressing his regrets that a governor he admired was taken down by a personal scandal.

“I thought he’s done a hell of a job, on everything from access to voting to infrastructure — a whole range of things. That’s why it’s so sad,” Biden mournfully declared after hearing of Cuomo’s official resignation.

Sirota savages Democrats, who he said willfully turned a blind eye to Cuomo’s numerous abuses of office while propping him up as a progressive superhero:

The nursing home massacre is just one of many examples of Cuomo lawlessness that should have elicited a law enforcement response but didn’t. The Albany Times Union details eight other scandals that Cuomo presided over. And those don’t include other corrupt dealings, like giving his book publisher special tax breaks and funneling bond deals to his donors.

On Tuesday, the New Yorker reported that Cuomo tried to strong-arm the Obama White House in 2014 to get the Justice Department to stop probing his decision to shut down an anti-corruption panel. Obama officials said nothing publicly about this for years; it only came out now, after Cuomo had become unpopular and disempowered, when they would be safe from any blowback from MSNBC watchers and #TeamBlue enforcers. They knew their audience well: Until a few months ago, media outlets, Democratic politicians, and Democratic voters averted their eyes from Cuomo’s crime spree, instead seeing him as an idol to be worshiped, endorsed and supported as the great “Cuomosexual” future of the party.

Sirota writes that corrupt Republican pols also took advantage of what had been Cuomo’s Teflon status to get in on the game as well:

Consider that the health care lobby group that donated to Cuomo and drafted his nursing home immunity bill also funneled large sums of cash to New York Democratic legislators who passed that bill. And once that immunity bill was signed into law, Republican politicians then copied and pasted the language into their own state and federal bills, while raking in cash from health care interests.

It is indeed a sad fact of the times that flagrant and deep-seated corruption is not enough to get a tenured elected official thrown out of office. If you have any doubts on that score, please note the fact that Sen. Dianne Feinstein (D-CA), an entrenched figure in the U.S. Senate for three decades, has still not faced any serious inquiry into the shocking 2018 revelation that she had employed a communist Chinese spy on her personal staff for 20 years. This despite the fact that her husband engaged in lucrative business dealings in China as she served on Senate committees overseeing U.S.-China affairs.

Sirota aptly ends his fiery piece by observing how our ruling political elite prefers to isolate scandal in its ranks to individuals and their personal flaws:

Impeachment and resignation only entered the discourse in response to his grotesque interpersonal behavior, in part because that could be portrayed as merely a problem of one bad apple in the barrel.

The trouble is, we also have a barrel problem. And Cuomo’s departure leaves it intact.