The travel industry has been on a wild trip since the COVID crash.

Airlines, casinos and cruise line operators are still trying to navigate the pandemic world, and the new Omicron variant has only increased the turbulence. The stock prices show how difficult it has been for these businesses. Most of the stocks are below pre-pandemic levels, in spite of the broad economy showing very recent new high activity levels. A few are even flirting with new multi-year lows.

Let’s take a vacation into the group and see if we want to extend our stay or get home early.

The S&P 500 fell 38.5% during the COVID crash, the worst one-month performance in history. Nonetheless, cruise line stocks wish they had it so well. In the middle of January, 2020, Norwegian Cruise Line Holdings was trading at $60 a share. Two months later the stock hit $7. American Airlines fell from $31 to $8, and Marriott dropped by 60%.

As the general stock market began the current bull phase, investors were attracted to the beaten down travel group and the stocks saw 100-200% returns in less than six months. Even Boeing, which was having problems before Covid due to the Max crashes, saw their stock jump 75%. JETS, the ETF for airline and related companies, went from $11 to over $28 by March of this year.

Since then, the group has been held hostage by conflicting news on the COVID front. Delta wave spikes led to sharp price drops, while decreasing travel restrictions created quick rallies. Bloomberg news announced that airline travel in the U.S. would return to pre-pandemic levels over the Thanksgiving weekend, which was in contrast to news out of Europe that Austria and other countries are locking down again. Going into Thanksgiving, Carnival stock was at the lowest point in four months and Las Vegas Sands barely above the coronavirus crash-low of $38 a share. The pre-Thanksgiving selloff in Carnival’s stock was particularly jarring. It had fallen 10 days in a row, losing over 21% along the way. CCL threw the anchor, and the stock went down with it.

Then news of Omicron hit over Thanksgiving Day dinner. CCL dropped another 15.4% at is lowest the next day, a day which we may called Red Friday. Airlines stocks already nearly grounded fell still further. By 11:30 Friday morning, JETS had dropped another 10%, a profound move for an ETF, a vehicle much less volatile in nature than a single stock.

Other than deeply oversold conditions, the sector is not showing much bullish behavior lately. Although the airline industry received billions in government welfare after COVID, most of the operators took on huge debt in order to stay alive. JETS undid an uptrend dating back to July, and Boeing gapped down on a huge volume expansion on Friday. It did so on an even greater volume expansion the Friday before.

A snap back rally is probably coming in the near term, but airline stocks will struggle over the next few years as interest expenses on the debt mountain will keep a lid on the longer-term picture.

There is one airline stock that is staying airborne recently. Atlas Air, AAWW, is in a confirmed uptrend after breaking out in late September. The 50-day moving average (gray) seems to offer strong support for the stock, which means it might be a decent buy there if it continues to fall back a bit. 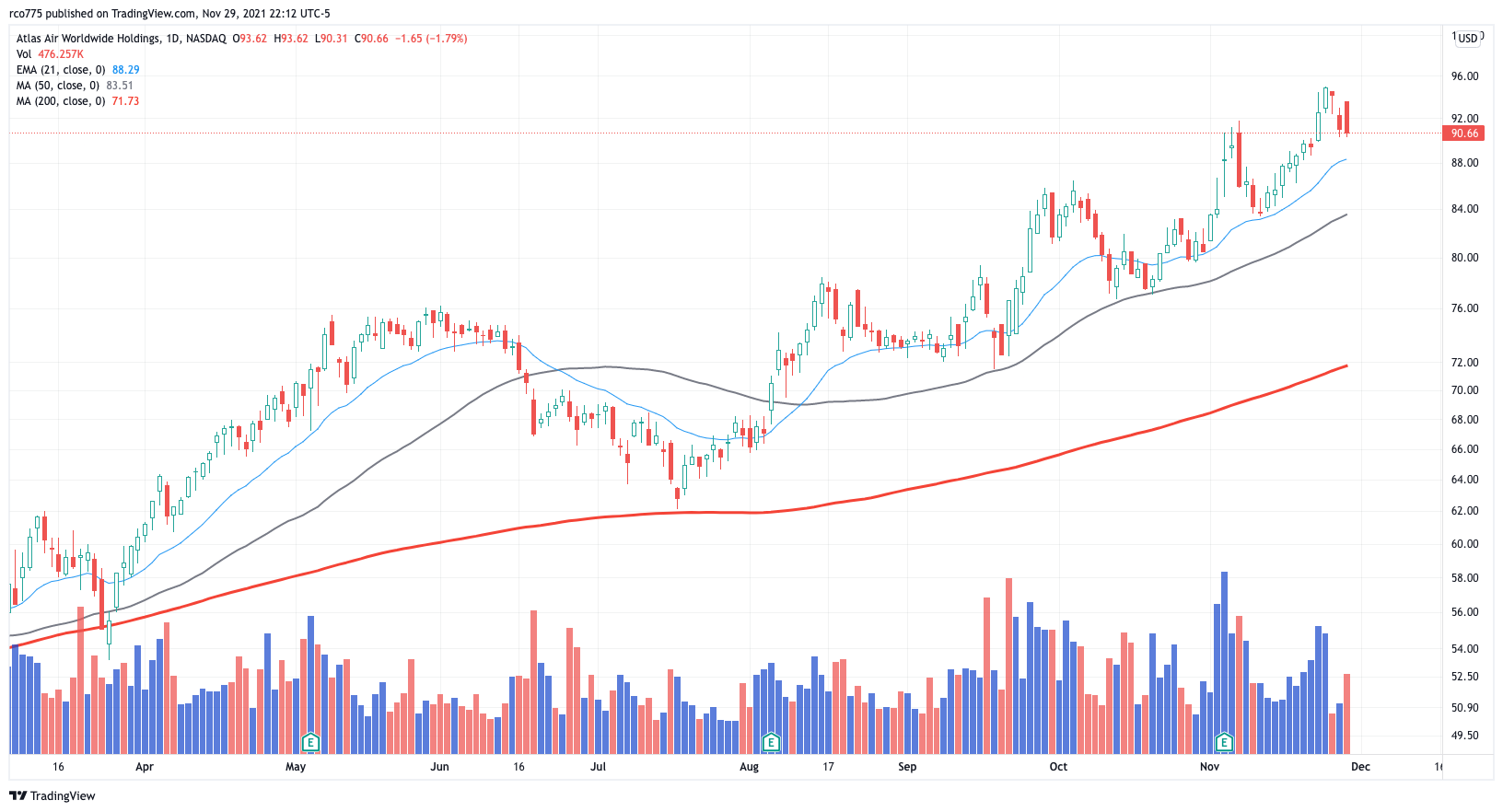 The travel bin can be played for news driven rallies, but longer-term interest by large institutional funds remains absent in the group. The turbulence will probably go both ways here for a while.

On Nov. 11, I wrote on the housing market. You may have noticed a resurgence in the homebuilding stocks since early October. ITB and XHB, two large ETF’s for homebuilding companies, hit new highs last week. As this was taking place, two groups within the industrial sector, building products and building construction, caught on with traders and built up some gains.

While most of the stocks are extended, making them risky for new entries now, there is one ETF that looks attractive after a little pullback. FXR is comprised of stocks in the durable production market. It recently broke out from a six-month consolidation, retested new highs, and pulled back on Red Friday.  Something to think about. 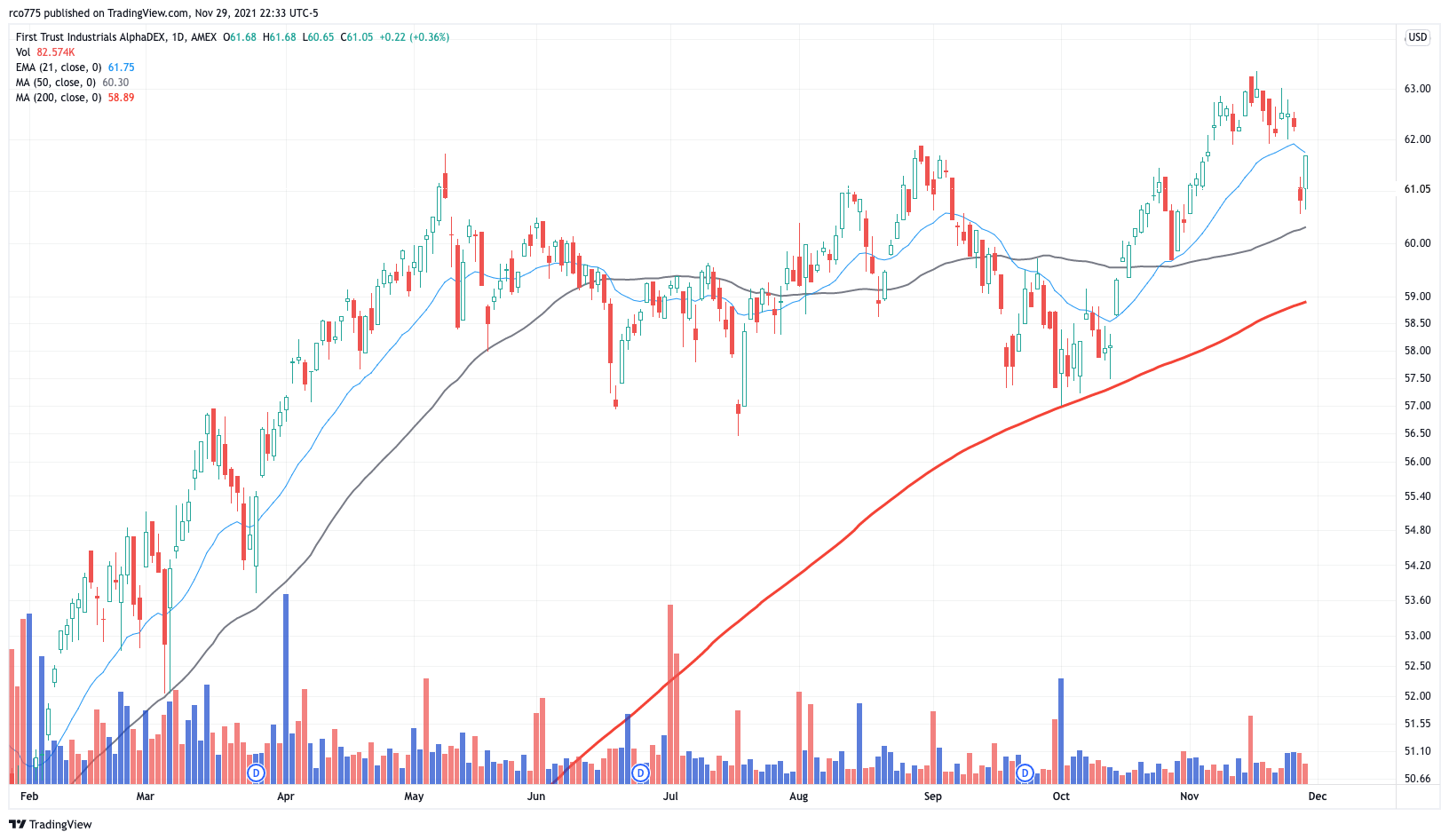