Romulus Report: The stock market is like a river

Many years ago, I took a canoe trip down a fast-moving river. It was in July, hot without much wind. There were periods of calm water when we could easily paddle with the current. We also had stretches of turbulence when we weren’t paddling as much as steering the boat around the rocks. After getting through the rapids, the water would calm down again and we went about our business of gliding down the river.

The stock market is like a river. There are times when it is calm, and investors are gliding right along. As we’ve seen so far this year, though, sometimes it is wild, and most people just try to hang on. In order to thoroughly enjoy the ride, however, we must be prepared for the easy times and when conditions get a little rough. 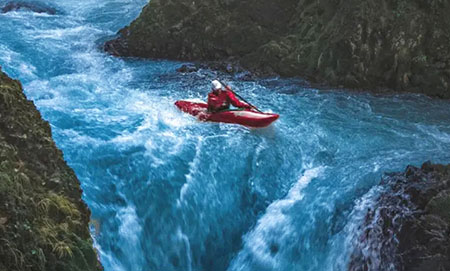 I don’t know about you, but I wouldn’t go on a river trip without looking into a few things first.

I want to know what the weather is going to be like. I will find out how the river is at that time of year, along with a good understanding of the equipment I am using. I will bring enough food and water and make sure any necessary safety procedures are in place. After that, I get in the water and let it rip.

2020 was one of the most interesting years in stock market history. The S&P 500 fell almost 40% in March, and still managed to go up nearly 20% by the end of the year. The losses were so swift that most investors were frozen in a state of shock before they had time to think about acting. By the time the shock wore off stocks were running hard to the upside and people were jumping in with all the free government money they had.

Retail investors were jumping into something they didn’t really understand, though. They weren’t involved in the markets in 2008, let alone 2001. Something I tell members of my trading group, Club Romulus, is to look at a chart of the Nasdaq (QQQ)  during 2008 and 2001. Use a daily chart and go through it slowly. It will improve your respect for that four-letter word, RISK. The vast majority of retail investors in 2020 didn’t take even a minute to learn about the river they were jumping into.

Some of those people are now done with the market. As I stated last March, you don’t hear the word meme attached to a stock anymore. Wall Street Bets isn’t part of the pop culture conversation these days. Cathy Wood from ARKK Capital still gets coverage, but now it is about how much money she continues to lose. The stock market river is not always an easy ride.

I coined a phrase a while ago called the “recency effect.” It is the human tendency to believe that the long-term future will be like the recent past.

The recent action in Meta stock (FB) is a good example of this. Last Thursday, FB lost more in total value than any stock in trading history. There is a lot of bad news surrounding the company, and many retail investors think FB will keep falling off the cliff for days until it is almost worthless. It could happen like that, but the odds are firmly against such an outcome. Even after the fall, FB is one of the largest companies in the world. It will continue to generate billions in net income for years.

In addition, trading behavior doesn’t typically work like that. It is calm periods, followed by turbulence, followed by calm periods. FB can easily be much lower than current price 6 months from now. But over the next few months it will most likely stay in a 5% range of where it is trading today.

Speaking of FB, consider the recent trading fiascos of NFLX, PYPL or FB. All three stocks dropped between 20-25% the day after their earnings came out. For the second half of 2021, it was the smaller companies that were being taken out back and shot. Now, however, they are coming after the bigger players.

This represents a change in market psychology, but it reinforces what I said at the start of 2021—that the technology sector would under-perform. I also wrote last August that the Age of the Tech Titan is over, and I haven’t seen anything since that shows I should change my view.

With that, perhaps there is something we can learn from these disasters that can help us make sure we don’t get caught up in anything like that in the future.

NFLX got smashed first, so let’s go to the movies.

The problems began surfacing on July 21st, the day after second quarter earnings came out. The stock only fell 3%, but the drop came on a huge volume spike, one of the highest volume days of the year. The following earnings release didn’t help, as the stock fell again with another volume jump. After that, there are no identifiable periods of accumulation.

The RSI 14 began warning of a character change in early October. That continued until the middle of November, when the stock hit another new high and the RSI was unable to climb above 64, which was much weaker than the 85 level it high in early September. All this was followed by a trendline break in late November that put the finishing touches on the entire topping process.

When NFLX fell below the 200-day moving average on January 6th, the stock was almost 20% below the all-time high. As if there weren’t enough reasons to exit the stock, a trip below the 200-day on another volume jump should have been the final straw. NFLX slips lower for the next 9 days, then BAM!

There is a hole in the boat, dear Liza, a hole. 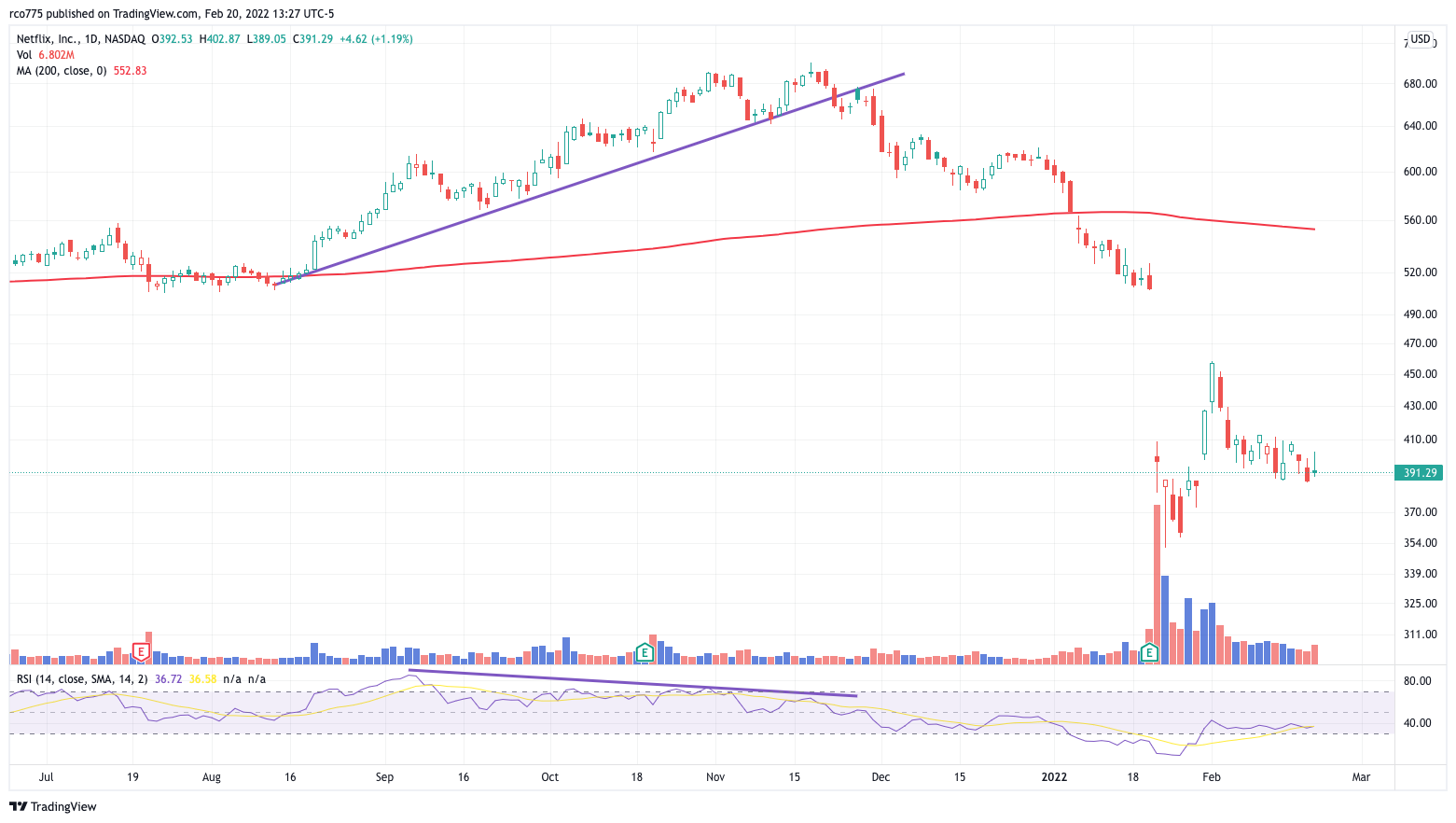 PYPL has a similar look to NFLX, but the damage began appearing much earlier, with the stock putting in a high last February.

PYPL was one of the Covid darlings, benefiting from the spike in online shopping during the lockdowns. The earnings report on May 5th started a pattern that has only gotten worse for the stock since then. PYPL fell mildly on May 5th, but the next earnings report had a little more teeth to it, pulling the stock down 6% on the day. Things became slightly worse on November 9th as the stock fell 10% on the day. Then things went from bad to unruly. On February 2nd, after the earning came out, PYPL got slammed for a 24% loss. This completes a major topping pattern that will leave PYPL below its all-time high of $310 for the next several years. Note that the stock put in a double top after the gap down on November 9th. Obviously, that was a negative development. 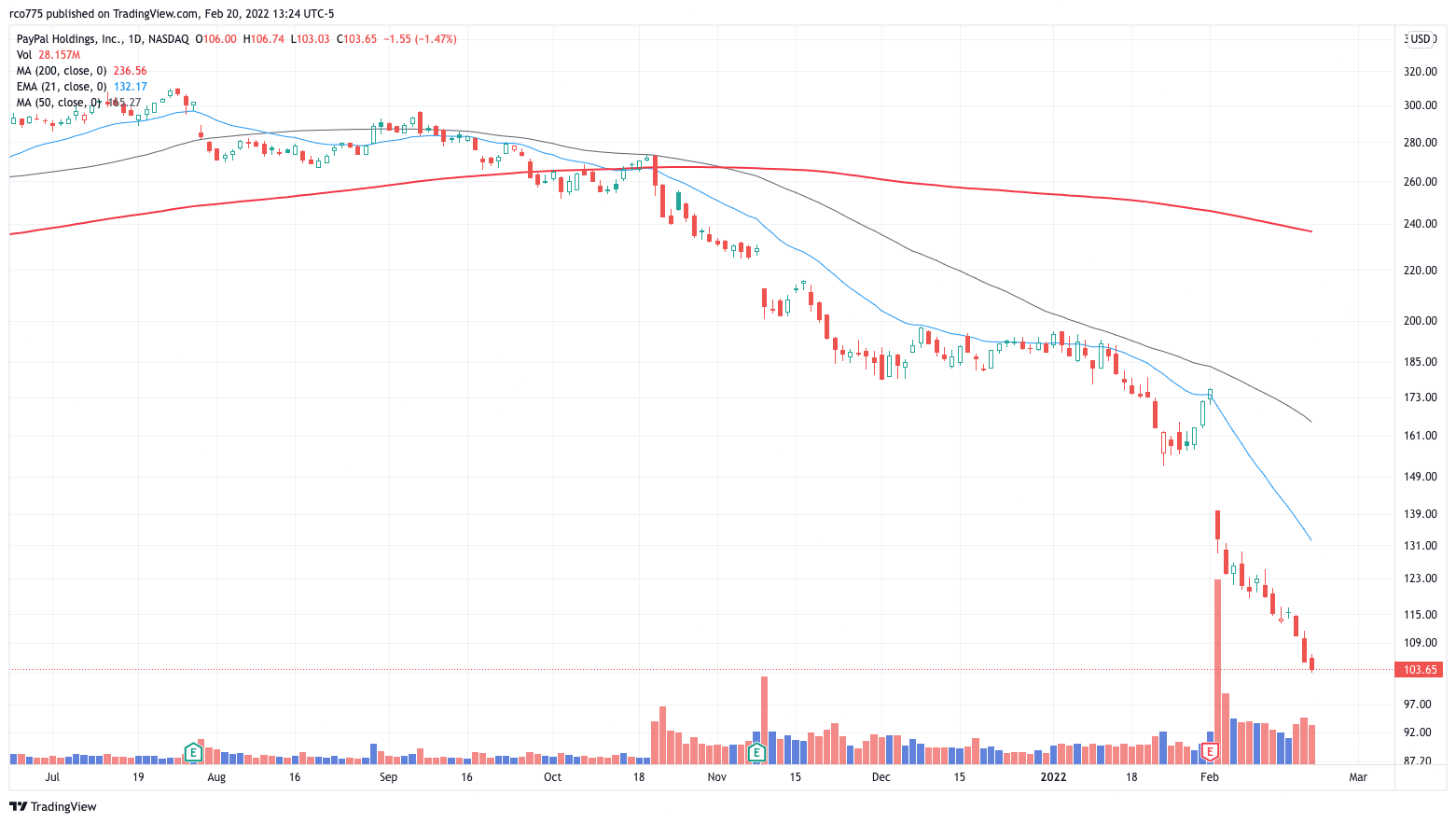 FB is a unique corporate story. No one claims to like the company. I’ve never seen a Facebook sticker on the back of someone’s car, like I used to see Apple logos all over the place. I don’t know anyone who would get FB tattooed on their arm, but I know a lot of people with HD tattoos (that is Harley Davidson, for those who don’t know). I don’t like Mark Zuckerburg and I hate Facebook. I think the company is sleazy and creepy. I hear a lot of people feel the same way and yet more than 2 billion people use the site every day.

The company will survive, but if the trading gods are good, then the stock will get cut in half over the next few years as has almost happened in the last few months. The stock is down 41% since hitting the all-time high last September. After 4% drops during the last 2 earnings reports, FB got its face ripped off on February 3rd. Twenty-six percent in one day. Traders gave the stock a strong thumbs down. FB will survive, but it may never see $385 again. 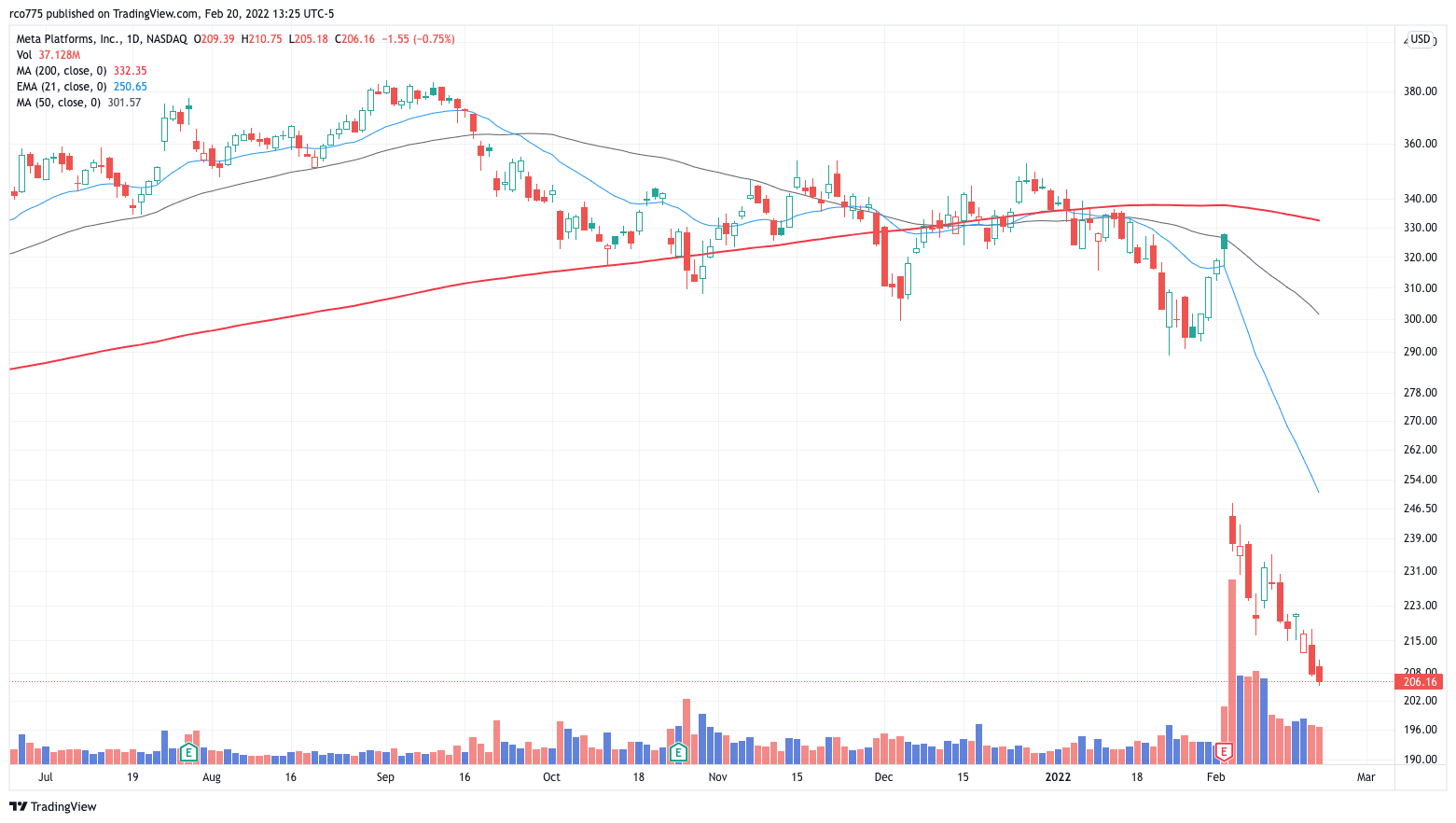 In January, the stock market suffered its worst selling period since the Covid crash of March 2020. A lot of traders watched the action and bet heavily against the market right near the lows on January 24th. Stocks then proceeded to bounce, giving the Nasdaq an 11% rally in only 8 days. Things have calmed down since then, as can be seen from the VIX (a tool that measures turbulence) pulling way back from recent highs. It will not be smooth canoeing from here on out. There is a high probability that the lows on January 24th will be taken out before the end of March.

But the market is a river, and periods of turbulence will often be followed by calm waters, at least for a bit.