Since the leftists who comprise Team Biden seem to view “patriots” as “domestic terrorists,” it is not surprising that the government based in a militarized Washington, D.C. would seek to cancel two uniquely patriotic events.

Team Biden has canceled Fourth of July fireworks at Mount Rushmore and is also targeting the annual Rolling Thunder motorcycle rally in the nation’s capital. 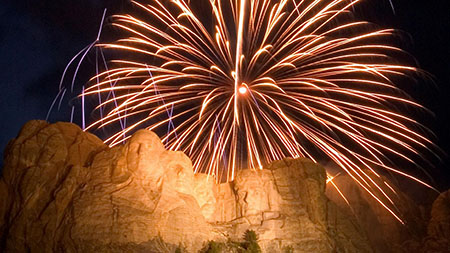 Joe Biden’s Department of Defense has denied a parking permit for American Veterans to hold the 33rd annual Rolling to Remember rally in Washington, D.C. on Memorial Day weekend.

AMVETS, the national veterans group organizing the ride, said the Defense Department has ignored its application to use the Pentagon parking lot as a staging area. For 32 consecutive years, thousands of motorcyclists gathered in the parking lot before and after the ride around the National Mall.

The Pentagon “won’t even talk to us,” said Chenelly, national executive director of AMVETS.. “We’ve been trying to really be good partners in all of this and not blast the Pentagon, but we’ve gotten to the point recently where we have to put the pressure on them.”

The Pentagon’s special events office sent Chenelly an approved permit in April but then rescinded the approval eight days later, citing Covid-19. At that time, Chenelly told the Pentagon he needed an answer by April 16.

“It’s April 20 today, and we still haven’t heard anything back,” Chenelly said.

Jessie Jane Duff, a former U.S. Marine Corps Gunnery Sergeant and co-chair of Veterans for Trump, tweeted: “This is unacceptable @SecDef. AmVets has honored our brothers and sisters who didn’t come home for 32 years. This gives a perception of political retaliation after the disgusting implications by Biden admin that vets are extremists. This is NOT a good look for @DeptofDefense.”

One response to Duff’s tweet said: “All Government agencies have become an enemy to the people that pay their salaries. This has become a top campaign topic for 2022 and 2024.”

Another wrote: “With every executive order, decision and decree, the entire Biden administration reaffirms their disdain for America, it’s patriotic organizations, it’s sacred symbols and it’s solemn traditions. While COVID might be the excuse of convenience, this is about systemic destruction.”

Team Biden cited Covid-19 as its reason for canceling the patriotic celebration, but Noem noted that the event was held last year “safely and responsibly” and it had “a huge positive impact on the South Dakota economy.”

The Republican governor is asking a judge to order a permit be granted “expeditiously” so the Independence Day celebration can be held at the iconic national monument.

“Mount Rushmore is the very best place to celebrate America’s birthday and all that makes our country special,” the federal court filing says.

“After telling us they’d ‘circle back,’ the Biden administration has not responded to our request to uphold the Memorandum Agreement between the State of South Dakota and the National Parks Service to host a safe and responsible national celebration and fireworks show,” Noem said.

Noem noted that “America’s Founding Fathers knew that Independence Day should be celebrated ‘with Pomp and Parade, with Shews, Games, Sports, Guns, Bells, Bonfires and Illuminations from one [e]nd of this Continent to the other,’ as stated by John Adams on July 3, 1776. And President Calvin Coolidge declared that Mount Rushmore was designed to be ‘a national shrine to which future generations will repair to declare their continuing allegiance to independence [and] self-government.’ ”