“What country can preserve it’s liberties if their rulers are not warned from time to time that their people preserve the spirit of resistance? Let them take arms. The remedy is to set them right as to facts, pardon and pacify them. What signify a few lives lost in a century or two? The tree of liberty must be refreshed from time to time with the blood of patriots and tyrants.” — Thomas Jefferson, 1787

Some American patriots felt they were spit on by the majority of House members and senators in Congress, along with Vice President Mike Pence, who on Jan. 6 certified an election millions of Trump supporters believe was stolen.

Attorney Lin Wood, in a last tweet before being banned, wrote: “Patriots must ALL be prepared to stand tall. Do not seek to do violence but be prepared to defend yourselves & your family. Ignore Pence & Biden. Listen only to President Trump.” 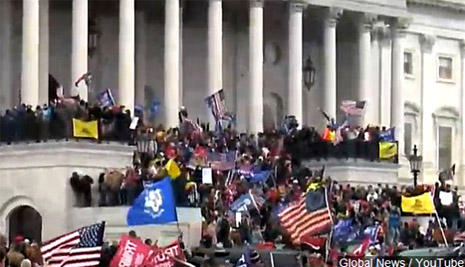 Newsmax’s Greg Kelly put the storming of the Capitol on Jan. 6 in perspective unlike many in the conservative media who rushed to condemn the entire contingent of demonstrators. See below.

In retrospect, the breach of the Capitol sent a powerful message to Congress, the “swamp”, nation and the world: There was a major, unresolved problem with the Nov. 3, 2020 U.S. presidential election. Fraud allegations remain uninvestigated, unresolved and constitute an open sore on the body politic of the United States.

How can you lecture Americans about venting their anger after they have been treated with contempt by the “ruling class”, corporate media, and Big Tech for the better part of a year?

How does insisting the Constitution must be followed mean anything when that document was shredded and trampled on by officials in contested election states?

“There are only two ways to take power: Persuasion and Force.

“The elitists have abandoned persuasion and are now taking power by force of fraud by exploiting the corrupt power of our federal government.

“Because our votes no longer matter and our elected leaders ignore our voice, we need to play by their imposed rules of force.

“I was at the Capitol all day yesterday and the actions at the Capitol, were, well, mostly peaceful. Could Antifa have been the instigator? Maybe, but plenty of Patriots happily followed.

“I mourn the loss of the woman who was shot and killed, but I am not going to apologize for reminding the politicians whose House it is, and making them feel a bit uncomfortable with the consequences of their abuse of power.

“No, I did not enter the Capitol, but understand and appreciate those who thought it necessary.”

“They keep attacking our president,” she told the crowd at Wednesday’s March to Save America. “Every time they attack him, it’s an attack on you and me. I’m sick of it. Let Republicans know, we’re coming for you. And Democrats too.”

Trump allies said they won’t forget what they call Republicans’ betrayal of the president.

“In two years, every politician that turns their back on our country will lose their seat,” said Trump campaign senior adviser Katrina Pierson. “Even if they think for a second that they’re going to get away with it today, they’ve got another thing coming. Today is just the beginning. We are taking names today.”

Pierson said the leaders of the Trump movement will target lawmakers who don’t support Trump in the congressional vote and will “work on replacing them one by one if we have to.”

The president’s eldest son, Donald Trump Jr., said of Republican lawmakers, “If you’re gonna be the zero and not the hero, we’re coming for you and we’re going to have a good time doing it. I suggest you choose wisely.”

Referring to the thousands of supporters on the National Mall, Trump Jr. said: “It should be a message to all the Republicans who have not been willing to actually fight — the people who did nothing to stop the steal. This gathering should send a message to them — this isn’t their Republican Party anymore. This is Donald Trump‘s Republican Party!”