Last week we highlighted some of the numerous former Obama administration officials who have embedded themselves in the upper ranks of the big-brand corporations now supporting Black Lives Matter and the hooligans rioting and looting in the streets following the death of George Floyd.

Make no mistake. Globalist capitalism is every bit as anti-nation state as Cultural Leftism. 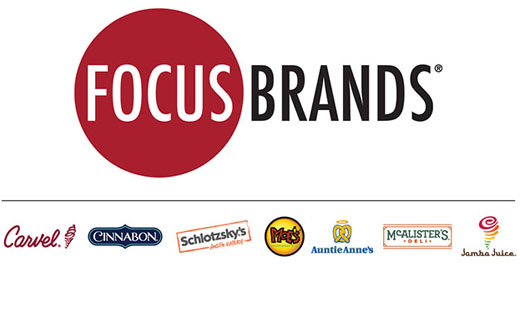 But there is another aspect behind big-box corporate support for progressive rot that needs to be emphasized. That is the drab leveling nature inherent to woke bland multinational capitalism. We’re going to focus on Focus Brands, purveyors of crappy tasteless mass-produced food products, and the token radical female company president it has tabbed to help run the show.

Focus Brands is owned by Roark Capital, a private equity firm that is the parent company for several of the worst mass retail food operations in America. These outlets offer absolutely terrible assembly-line food, as the companies exist solely to maximize profit for the private equity concern. The result is dietary chain retail hell.

As befits such an enterprise, Roark Capital is named after Howard Roark, the main character in objectivist Ayn Rand’s famous novel Atlas Shrugged. Rand championed a radical individualism so extreme that she believed selfishness to be a virtue. As the Atlas Society, an organization that promotes Rand’s objectivist philosophy, states:

“Rand argues that a virtue is an action by which one secures and protects one’s rational values—ultimately, one’s life and happiness. Since a concern with one’s own interests is a character trait that, when translated into action, enables one to achieve and guard one’s own well-being, it follows that selfishness is a virtue.”

In its food ventures, Roark Capital personifies an amoral transactional business climate devoid of actual quality. Cultural leftism finds easy entre into such a value-deprived atmosphere, with these faceless corporations eager to embrace its tropes under the rubric of a soggy marketing label known as “diversity.” The sheer mediocrity found in chain-store boardrooms effortlessly gives way to the endless promotion of Cultural Marxist mantras that we see in the corporate world today, to the lavish financial support for radical movements like Black Lives Matter and to the tyranny of small minds rapidly germinating in the American workplace. The ramifications affect us all.

Focus Brands is the umbrella organization for several well-known food and retail outlets, including Carvel, Cinnabon and Jamba Juice. On June 2, Focus performed its perfunctory bending of the knee to the social justice radicals, vowing to “do our part to be an ally and advocate for equality in the communities we serve. Let’s stand together to work toward a better, equal and loving society.”

Kat Cole is Chief Operating Officer and President of Focus Brands North America. Cole had a “moment” several years back as a potpourri of mainstream media publications hailed her cheesy rise from former “Hooters Girl” to corporate executive. Cole was painted as the epitome of GO GIRL POWER in the executive washroom.

Highly active on social media, Cole, a member of Ted Turner’s globalist United Nations Foundation’s “Global Entrepreneurs Council,” now seems to spend most of her time promoting progressive radical causes. Cole was an early and enthusiastic supporter of Black Lives Matter. In a 2016 Facebook post, she explained the crucial necessity of developing an unequal playing field to promote racial justice:

“All lives matter – definitively – but YOU DON’T CORRECT TIPPED SCALES BY PUTTING EQUAL WEIGHT ON – BOTH SIDES, so let’s acknowledge the inequity and horrific things that come with that, and focus on those who are more judged, more abused, more victimized. …to even out the scales. If all lives matter, then we need to give diverse support and energy to #blacklivesmatter – if it is only black voices that say black lives matter, the movie never ends differently.”

It should go without saying that this is an incredibly disturbing viewpoint for an executive with hiring power at a major American corporation to hold. In a May post on Twitter, Cole voiced a zero-tolerance policy on “unchecked racism,” which again should be terrifying to those she employs:

“Generations of unchecked racism, programming and profiling lead to these horrors – that are not new, just caught. It takes everyone in earshot in eyeshot to stop the cycles. Don’t allow racism in even the tiniest forms in your presence.”

This should end well. Just imagine the vast array of little things you can be fired for in Cole’s racially obsessed authoritarian working environment.

Cole’s beliefs appear to be contagious at Focus. Heather Neary is President of Auntie Anne’s pretzels, a Focus Brands company. In a June 1 personal exchange of tweets with a BLM protest supporter that took place within a thread of an official Auntie Anne’s corporate tweet, Neary discussed her own wokeness and willingness to have Auntie Anne’s stores provide provisions to protesters in the streets – as they were burning cities and toppling public monuments:

Hi Jared – thanks for sharing this. I’ve personally donated to the @ACLU and @NAACP. Who else would you recommend?

…another idea that you can utilize to help, is by providing water or other supplies to protests

Unfortunately, many of our stores are closed, but this is an excellent suggestion and I’ll make sure we get some donations out from our (few) open stores. Thank you, again.

On her Twitter page, Kat Cole has openly urged for the impeachment of President Donald Trump, aggressively supported abortion, gun control and the diversity cult, and denounced “white privilege.”

Here she is agreeing that the racist patriarchy must be smashed:

Dabbling in the occult, Cole tweeted her happiness over feminist witches being favorably profiled by TIME magazine:

Love this 💫✨🌔 witchy power, women in their individual light https://t.co/MPVnRbTg7O

She declared her solidarity with a film industry activist in Georgia, home of Focus Brands, who smeared non-urban red voters as gullible rubes easily manipulated by Washington politicians:

Her pro-abortion missives are especially worth noting because they tout official corporate backing for the murderous procedure. Cole retweeted a post that details 180 companies stating that abortion restrictions are bad for business.

Cole fashioned her opposition to a 2019 Georgia law that prohibits abortions after a heartbeat can be detected in business terms, obviously utilizing her position as a corporate exec:

Unacceptable! This will harm our state’s business community, our ability to recruit and retain talent and more. It signals GA is backward, not forward, and is disconnected from the health and economic impact this will make on the majority (and most vulnerable) populations. https://t.co/Ip8BAIHN5y

Women have a sacred right to bodily autonomy. Georgia’s forced pregnancy bill — passed in large part because of voter suppression — would take away that right if allowed to go into effect. #stopthebans https://t.co/DwqZDlMe3V

An amoral private equity fund owns a major food retail corporation and ends up with a group president that supports violent radicals, “loves” witchcraft and considers abortion a sacrament.

Please take all this into consideration the next time you have a hankering for a Cinnabon roll or Auntie Anne’s pretzel at a rest stop off the highway or airport concourse.

The barren strip-mall, big-box cookie-cutter culture too prevalent in corporate America comes with a steep price. Impersonal multinational capitalism and cultural leftism are imposing a social, cultural and material mediocrity over the citizenry of this nation. Where quality is an afterthought, baseness thrives. Where baseness thrives, cultural Marxism will inevitably reign supreme.