The United Nations is giving migrants a boost as they trek toward the U.S. in the form of debit cards, a report said. 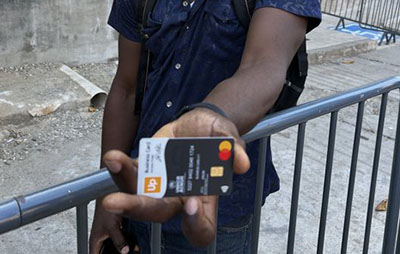 Todd Bensman, Senior National Security Fellow at the Center for Immigration Studies, reported that migrants at a UN office in Tapachula, Mexico said that payments are being loaded onto the electronic cash cards for them.

Bensman said a Haitian migrant told him he was expecting a disbursement of 3,600 Mexican pesos ($175) for the month of January but it had not been deposited on his card.

“They haven’t deposited to my account,” the migrant said before displaying a debit card branded with the logo of the UNHCR — the UN Refugee Agency.

In November, Bensman reported from a large camp in Reynosa, Mexico, where staffers were handing out debit cards to migrants on their way to the U.S.

“The IOM workers said a migrant family of four gets about $800 a month. I watched long lines of migrants get their UN debit cards,” Bensman reported at the time.

A Haitian by the United Nations office in Tapachula, Mexico shows the cash card it gave him. Says he came to complain that his $3,500 peso payment (about $175 US) didn’t deposit this month. A significant line of migrants is outside to apply for cash too. pic.twitter.com/LJg8rdFKvi

A “significant line” of migrants was waiting outside the UN office, according to Bensman, including additional Haitians who claimed migrants from other countries were receiving more money than them.

A sea of African migrants outside the Mexican COMAR immigration offices to get papers in Tapachula, Mexico near the Guatemala border. Later@they will try for UN cash debit cards. They are Senegalese, Nigerians, Angolans and Ghanians. They tell me so@e Somalis are here pic.twitter.com/8BVsgPfWeN