President Donald Trump in October told radio host Rush Limbaugh that he was deeply disappointed in Fox News during the 2020 election season, going so far as to call the network an “obstacle” to his campaign. 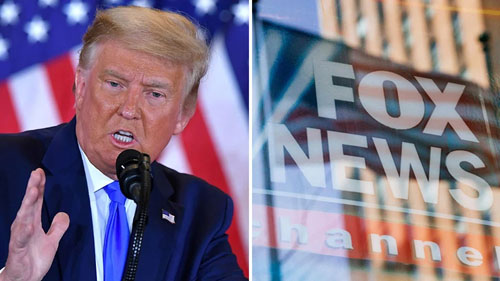 “You have such an incredible audience. So I can tell them about Fox being a big obstacle,” Trump told Limbaugh “It’s a problem. Fox is a problem.”

Trump may have the solution.

With one of the most valuable list of contacts in politics, Trump is considering launching a digital media channel to take on Fox News, Axios reported on Thursday.

“Trump’s digital offering would likely charge a monthly fee to MAGA fans. Many are Fox News viewers, and he’d aim to replace the network — and the $5.99-a-month Fox Nation streaming service, which has an 85% conversion rate from free trials to paid subscribers — as their top destination,” the report said.

The report added that “Trump’s database of email and cellphone contacts would be a huge head start.”

“”He plans to wreck Fox, no doubt about it. He’s going to spend a lot of time slamming Fox,” a source told Axios.

The president tweeted on Thursday: “.@FoxNews daytime ratings have completely collapsed. Weekend daytime even WORSE. Very sad to watch this happen, but they forgot what made them successful, what got them there. They forgot the Golden Goose. The biggest difference between the 2016 Election, and 2020, was @FoxNews!”

“We love competition,” Fox Corp. CEO Lachlan Murdoch said on a Nov. 3 earnings call. “We have always thrived with competition… Fox News has been the number one network.”