Teachers unions, even in “progressive” California and New York, have for years invested in gun manufacturers, including those which make AR-style rifles, a report said.

“Teacher union pension investments from coast-to-coast have continued to buy stock in gun and ammunition companies despite the outrage expressed by many teachers following recent school shootings,” Richard Pollock reported for The Daily Caller News Foundation on Feb. 27. 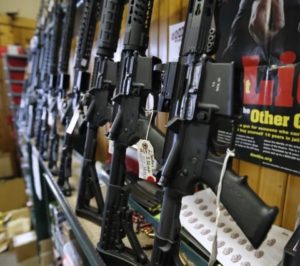 According to a 2013 poll conducted by the National Education Association (NEA), 76 percent of NEA members “support a proposal to ban the sale and possession of military-style semi-automatic assault weapons to everyone except the police and military.”

“Liberal teachers may claim they abhor guns, but their pension investments show they are willing to invest in the nation’s biggest gun and ammunition manufacturers,” Pollock noted.

“We would hope and encourage the governor and the cabinet to divest from those companies and place our money somewhere else,” FEA President Joanne McCall said, according to the Orlando Weekly.

“No decision has been made on divestment of gun stocks from our portfolios,” John Cardillo, the New York pension’s spokesman, told CNBC.

CalSTRS continues its investment in the Olin Corp., which makes ammunition, including small-caliber military ammunition, according to a CNBC report.

David Bradley, a board member of the Texas Permanent School Fund, told the Daily Caller that teachers who are upset about investment in gun companies “are a bunch of weenies. We don’t kowtow to every special interest that wants us to divest. We’re in the business of making money for public education. If you’re a fiduciary, you’re responsible for investment returns, not to push my own personal agenda.”